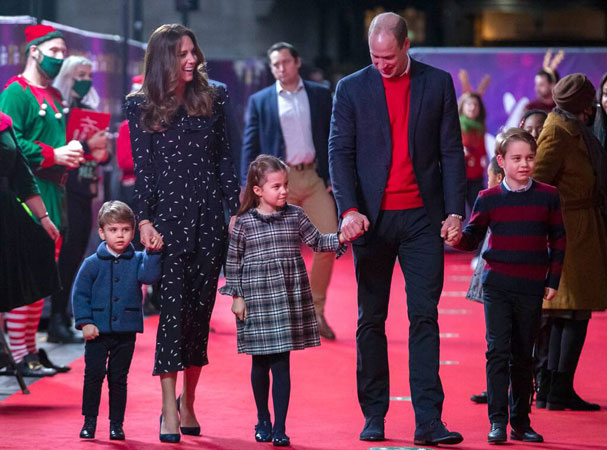 Surprise! Kate Middleton and Prince William took their three kids, Prince George, 7, Princess Charlotte, 5, and Prince Louis, 2, on a fun night out to celebrate the holidays and to pay tribute to coronavirus pandemic front-line workers.

On Thursday, Dec. 10, the five attended the National Lottery’s Pantoland, a holiday pantomime, or comedic and usually interactive play aimed at children. The event was held to thank first-responders and their families.

This marked the first time Kate and William’s children have walked a red carpet and the first public appearances for the kids in several months. The Duke and Duchess of Cambridge have been out and about a few times since the start of the pandemic earlier this year, most recently on a U.K. train tour. 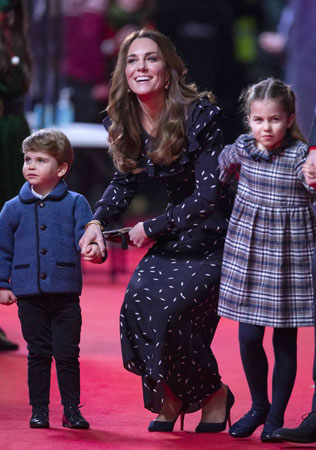 The family was photographed walking the red carpet into the Palladium Theatre in London and while seated together in a private box. The adults wore masks. At one point, Charlotte was spotted playing with George and making funny gestures.

Before the performance, William gave a speech to thank essential workers across the United Kingdom for the sacrifices they have made to keep the country operating and to support their communities. During the intermission, he and Kate met a small group of them and their families and later went backstage to thank the show’s cast and crew.

In March, Kensington Palace released a rare video of George, Charlotte and Louis cheering on the coronavirus pandemic front-line workers and volunteers.