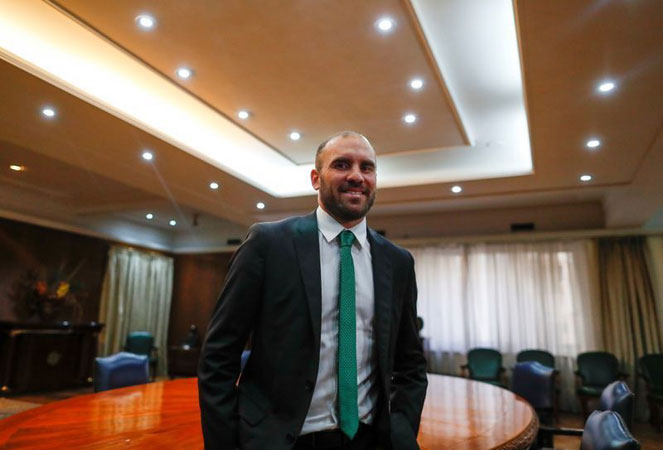 Argentina’s currency crisis will not be resolved with a “one shot” fix, Economy Minister Martin Guzman told Reuters, indicating a continued slow decline for the peso rather than a sudden devaluation.

As the South American country suffers a biting economic slowdown, markets are closely watching the wide gap between the official rate and trades in alternative markets which has stoked speculation the peso could be allowed to fall sharply.

However, Guzman said he expected the peso to weaken with inflation over the year ahead, keeping the real exchange rate steady even as capital controls bolster reserves.

“This is not going to be resolved in one shot. It takes time,” the 38-year-old economist said during an interview held in his Buenos Aires office.

“We expect the rate of devaluation next year to go hand in hand with inflation. The idea is to maintain a stable real exchange rate,” he said, adding that November inflation would cool from October’s level.

The government expects inflation of around 29% next year, although analysts predict that it will accelerate to a far higher 50% as spending taps open to fund an economic revival.

Argentina has been battling a currency crisis since late 2019 that forced the previous government of Mauricio Macri to implement currency controls. These have been tightened under Guzman and center-left President Alberto Fernandez.

The gap between the spot market peso-dollar price and black market trades is around 78%, after ballooning to nearly 150% in late October. That forced the government to take steps to calm market fears about tumbling foreign reserves and allow the spot rate to decline faster.

Guzman, who negotiated the restructuring of some $110 billion in foreign currency bonds earlier this year, said the capital controls were a “defensive measure” but would stay in place “as long as we need to accumulate foreign reserves”.

Guzman said Argentina, in recession since 2018 and headed for an expected 11-12% economic contraction this year, would pull out of recession in the first half of next year.

“We are here, on our feet, and 2021 is going to be a better year,” Guzman said on Thursday, which marked one year in office for the government.

“I’m optimistic about the prospects for recovery in 2021.”

Guzman expects growth of 5% next year. A central bank poll estimated a contraction of around 11% this year with annual inflation running at 36.7%, down sharply from 2019.

The government needs to get the economy moving again, including exports of key grains, though Guzman said export taxes, unpopular among farmers in the soy, corn and wheat producing country, were unlikely to be cut.

“Now is not the time to think of measures that would lead to a decline in fiscal revenue. That would eventually undermine confidence, not increase confidence,” Guzman said.

The government is also in talks with the International Monetary Fund over a new program to replace a failed $57 billion facility from 2018. A deal is expected to be reached around March-April next year.

Asked if that would include new borrowing, Guzman said that Argentina would “have to be very careful at the time of making decisions about borrowing in foreign currency.” The country has already received around $44 billion of the 2018 facility.

Many in the country blamed orthodox IMF policies for setting the stage for a 2001 economic meltdown that plunged millions of middle-class Argentines into poverty.

Guzman said lessons must be learned from previous “turbulence” in relations between Argentina and the IMF.

“We have to be aware of the problems of the past in order to not repeat them but we always have to look forward.”