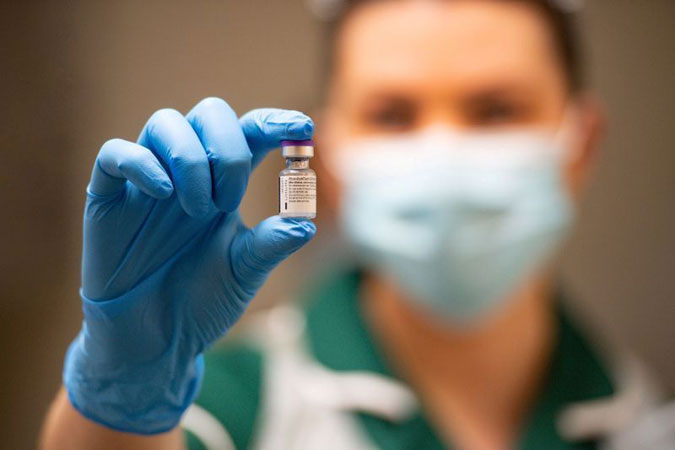 Britain hailed “V-Day” when it became the first country to roll out the Pfizer-BioNTech COVID-19 vaccine. Yet, as first mover, it has also become the first to report cases of adverse reactions, allowing other nations to watch and learn.

Officials from around the world are keen for British authorities to give them as much information as possible about the two reported cases of anaphylaxis among thousands of people inoculated since mass-vaccination began on Tuesday.

Anaphylaxis is an over-reaction of the body’s immune system, which health specialists describe as severe and sometimes life-threatening. While such allergic reactions are rare in any individual vaccine recipient, they are not unusual during large-scale rollouts, scientists, experts and industry figures said.

The reports nonetheless led to Britain’s Medicines and Healthcare products Regulatory Agency (MHRA) beefing up its guidance for the shot at midnight leading into Thursday, specifically warning that anyone with a history of anaphylaxis should not take it.

In the United States, regulators and public health officials are determining whether to approve the vaccine from Pfizer and BioNTech, and what advice to issue.

William Schaffner, an infectious disease expert at Vanderbilt University Medical Center, said the British regulator was being cautious in its approach to the shot, which uses new genetic mRNA technology. “They’re being very, very careful. These are new vaccines using a new technology. They’ve gotten a signal here that they need to investigate,” he said. “We’ll benefit from their investigation.”

Schaffner, who is a non-voting member of Centers for Disease Control and Prevention’s Advisory Committee on Immunization Practices, said the group would likely discuss the topic when it discusses the use of Pfizer’s vaccine on Friday. Stephen Hahn, commissioner of the U.S. Food and Drug Administration, said his agency was trying to learn from the UK experience.

“We’re working very closely with our UK partners to understand what went on with respect to those allergic reactions,” he told CBS News ahead of a meeting of outside advisers to weigh whether to recommend approval of the vaccine. Canada’s health ministry, which approved the vaccine on Wednesday, also said it would look at the reported reactions in Britain, but added that adverse events were to be expected and would not necessarily change the risk/benefit of the shot.

The MHRA, which last week became the first regulator in the world to approve the vaccine, said it was looking into the reports of anaphylaxis as a matter of priority.

“Anaphylaxis is a known, although very rare, side effect with any vaccine,” the watchdog said. “Most people will not get anaphylaxis and the benefits in protecting people against COVID-19 outweigh the risks.” Its updated guidance to health professionals reads: “Any person with a history of anaphylaxis to a vaccine, medicine or food should not receive the Pfizer-BioNTech vaccine.”

That fleshed out an earlier change, in response to the reports of adverse reactions, that had more broadly warned against those with a history of a “significant allergic reaction” to a vaccine, medicine or food taking the shot. A vaccination resources database for doctors in France estimates the number of anaphylaxis events at below 1 per 100,000 doses, although it says it can happen to “any patient with any type of vaccines”.

Paul Turner, an expert in allergy and immunology at Imperial College London’s who has been advising the MHRA, said it was unlikely the adverse reactions were due to food allergies.

They may have been caused by a component of Pfizer’s vaccine called polyethylene glycol, or PEG, which helps stabilise the shot and is not in other types of vaccines, he added.

“As we’ve had more information through, the initial concern that maybe it affects everyone with allergies is not true,” he said. “Likewise, people with a known allergy to just one medicine should not be at risk,” Turner told Reuters.

Pfizer and BioNTech said they were supporting the MHRA investigation.

Pfizer has said people with a history of severe adverse allergic reactions to vaccines or the candidate’s ingredients were excluded from their late-stage trials, which is reflected in the MHRA’s emergency-approval protocol.

‘CAN GET A HANDLE ON IT’

The British regulator insisted no corners were cut when it issued emergency use approval for Pfizer’s vaccine last Wednesday, adding that the highest standards were maintained, despite raising some eyebrows abroad with the move.

Top U.S. infectious diseases expert Anthony Fauci apologised for casting doubt on the MHRA’s rigour last week, while the EU drug regulator has said its process was more appropriate for the pandemic.

The founder of German biotech firm CureVac, whose own COVID-19 vaccine based on mRNA technology is in clinical trials, said the side effects seen in Britain were unsurprising.

“It is quite clear, with the immune system, that this can also explode. This applies to all immunisations, including the flu vaccination, for example,” Ingmar Hoerr told RTL/ntv. “But that’s not so bad, you can get a handle on it. You can take medication that brings the immune system down
again.”