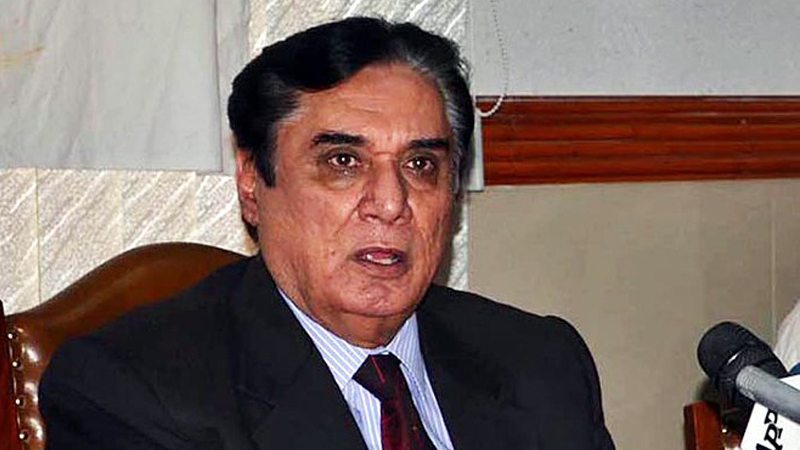 NAB Chairman Justice (r) Javed Iqbal Corruption is the mother of all evils which is one of the main hurdles in the progress and prosperity of the country. NAB was established to eradicate corruption and to recover looted money from corrupt elements and deposit in national exchequer. NAB under the dynamic leadership of Honorable Mr. Justice Javed Iqbal, Chairman NAB through its “Accountability for All” policy has not only apprehended big fish, besides recovering Rs. 466 billion looted money from corrupt elements and deposited all looted money in the national exchequer.

NAB not only vowed to ensure accountability of all and sundry but also successfully implemented his policy across the board. NAB has persistently monitors the performance of NAB Headquarters as well as all Regional Bureaus of NAB. The officers are being conveyed about their strengths and weaknesses in order to have better performance but also told to overcome their shortcomings as NAB strongly believes in Self Accountability under the dynamic leadership of Honorable Mr. Justice Javed Iqbal, Chairman NAB. NAB had itself prescribed ten months time to complete the process of initiating complaint versification, inquiries and investigations to filing a reference and if need the same duration is increased in order to have a logical conclusion of mega corruption cases. NAB has further activated prosecution and operation divisions of NAB by appointing new investigation officers and law officers and provided them training on modern lines in order to inquire and pursue all cases vigorously in respected courts including cases of white collar crimes.

Plea Bargain is prevalent in over thirty countries including the USA, UAE and other countries of the world. In the plea bargain, the accused only does not go to jail but he faces all other punishments under the relevant laws applied on the culprit. A plea bargainer lost honor and dignity in the society. After a plea bargain, the government servant is dismissed from government service immediately after striking a plea bargain. He becomes disqualified for Government service for his remaining life. A politician becomes disqualified for 10 years. He could hold public office or contest elections for ten years. In the case of a businessman, after a plea bargain, he could not obtain a loan from a scheduled bank for ten years. The whole amount recovered from a plea bargain is deposited in the national exchequer and NAB officers do not receive any money from the recovered amount as NAB always believes in absolute transparency, professionalism and merit as per law.

During the tenure of the present Chairman NAB Honorable Justice Javed, Iqbal, NAB has become a vibrant organization and its reputation and image has been increased manifold due to its “Accountability for All” policy. Chairman NAB firmly believes in taking action across the board by adopting “Accountability for All” policy without considering their status or position in government or opposition. Some 59 percent people of the country have expressed their satisfaction over the performance of NAB as manifested in surveys conducted by Gillani and Gallop. Transparency International Pakistan, World Economic Forum, PILDAT and Mashal Pakistan have also appreciated NAB. This has indeed rejuvenated NAB. NAB is the first Chairman of SAARC anti corruption forum and is the focal institution of the country as per anti corruption convention of United Nations (UNCAC), which is an honor for Pakistan due to NAB’s efforts. NAB has a distinction of signing MoU with China for combating corruption and sharing each other’s experiences regarding elimination of corruption.

NAB has registered a total of 53,643 complaints during the year 2019. Of which 42,760 were addressed as per law. NAB had authorized 2,166 complaint verifications and concluded 1,308 complaint verifications. NAB authorized 1,686 inquiries in the year 2019 and 747 inquiries for probe. NAB had approved 609 investigations and processed 269 investigations. Under the leadership of Honorable Mr. Justice Javed Iqbal, Chairman NAB has recovered record Rs 363 billion directly or indirectly from the corrupt elements and deposited in the national exchequer which is a remarkable achievement. Chairman has directed all DGs to honor the self esteem of all visiting persons as NAB is a human friendly organization which strongly believes in self respect of every person coming to NAB.