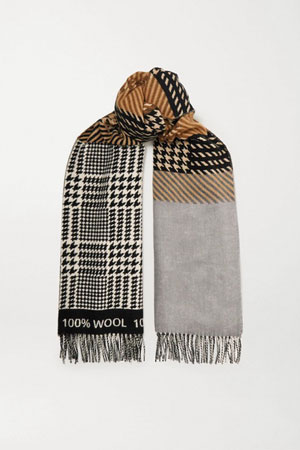 Prince Charles has launched a luxury wool scarf in collaboration with Mother of Pearl and Johnstons of Elgin. The Prince of Wales is said to have been “heavily involved” in designing the limited-edition scarf, released to mark the 10th anniversary of his Campaign for Wool, an initiative that he launched in 2010 to educate people about the benefits of wool while boosting the industry.

The scarf, available in blue, grey and pink, costs £150 and has been woven with exaggerated checks, stripes and houndstooth, as well as being tipped with twisted fringing.

“It is abundantly clear to me that we need to make changes to the way we think about the production, use and the disposal of clothing and textiles if we are going to get anywhere near to meeting the United Nations climate change goals set for the industry,” the Prince said in an online statement, as reported by Independent.

“A major part of that change has to be moving from a linear system to a circular one, where textiles and clothing are produced sustainably, enjoy long use and are made using materials which will biodegrade naturally and quickly at the end of their useful life,” he added. The new scarf, made with material from Australia, New Zealand, South Africa and the United Kingdom, aims to highlight the sustainability and durability of wool.