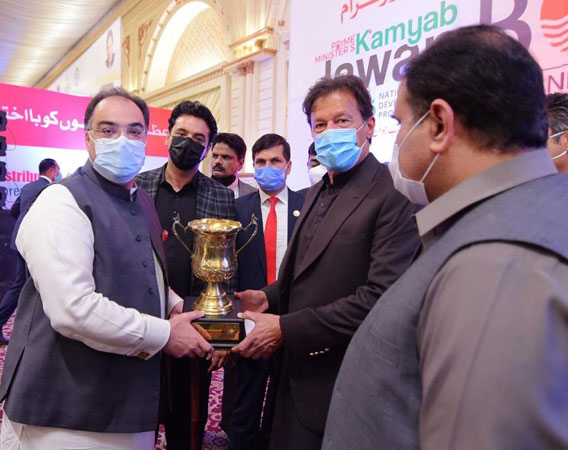 In a ceremony held in Sialkot, His Excellency Prime Minister Imran Khan awarded trophy to the Bank of Punjab for being the Top Performing Bank in Prime Minister’s Kamyab Jawan Program (Youth Employment Scheme) Disbursement. The trophy was received by Mr. Zafar Masud (President & CEO – The Bank of Punjab) on the behalf of bank.

Speaking at the ceremony, the Prime Minister paid a special tribute to Mr. Zafar Masud (President & CEO – The Bank of Punjab) for his vital role in working towards boosting economic growth. He appreciated the efforts of the BOP for its role in facilitation of Kamyab Jawan program as well as the Naya Pakistan Housing scheme.

The Bank of Punjab is the leading bank in terms of loan amount disbursement in the Phase I and Phase II of the Kamyab Jawan Program. The ceremony was attended by Chief Minister Punjab Sardar Usman Ahmad Khan Buzdar, federal ministers, provincial ministers and senior management of the bank.