Wealth of US billionaires soars during pandemic 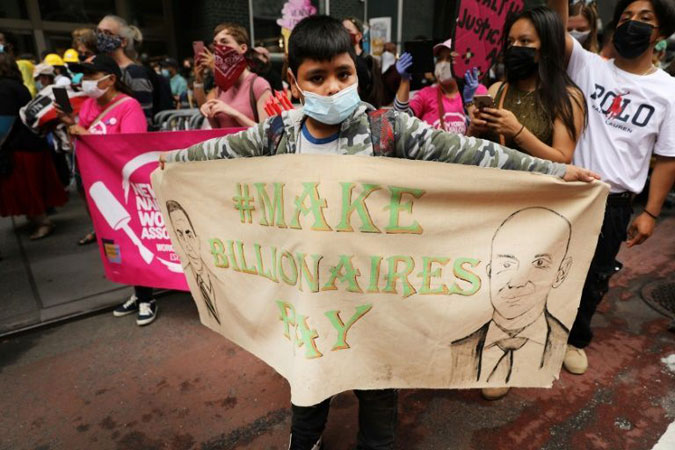 America’s billionaires have seen their wealth rise by more than $1 trillion since the start of the coronavirus pandemic, according to a study Wednesday, fueling a debate about higher taxes on the rich.

The collective wealth of the 651 billionaires in the United States soared from $2.95 trillion on March 18 to $4.01 trillion on Monday, said the Institute for Policy Studies and Americans for Tax Fairness (ATF).

“Never before has America seen such an accumulation of wealth in so few hands,” said Frank Clemente, ATF’s executive director, noting that the gain exceeds a relief package being considered by Congress.

“Their pandemic profits are so immense that America’s billionaires could pay for a major Covid relief bill and still not lose a dime of their pre-virus riches,” he added.

On Tuesday, the White House unveiled a $916 billion stimulus proposal in a final dash to break a months-long logjam over new aid for the coronavirus-stricken US economy before President Donald Trump leaves office in January.

The new proposal is slightly larger than a $908 billion compromise unveiled by a bipartisan group of senators last week.

The authors of the study say that the $1 trillion wealth gain would pay for stimulus checks of $3,000 for all of the roughly 300 million Americans.

The study adds to the already heated debate in the United States about taxing the rich more heavily to narrow growing wealth inequalities.

For example, Alexandria Ocasio-Cortez — a rising star on the left wing of the Democratic Party — is pushing for higher taxes in New York, which like many states is facing a budget crisis caused by the pandemic.

A study published by UBS bank and accounting firm PwC in October found that the cumulative wealth of the world’s dollar billionaires hit a new record of $10.2 trillion, above the previous peak of $8.9 billion recorded in 2017. The pandemic sparked a stock market crash in March, which saw some tumble out of the billionaires’ club, before a sharp rebound in technology and health stocks boosted billionaires in those sectors.