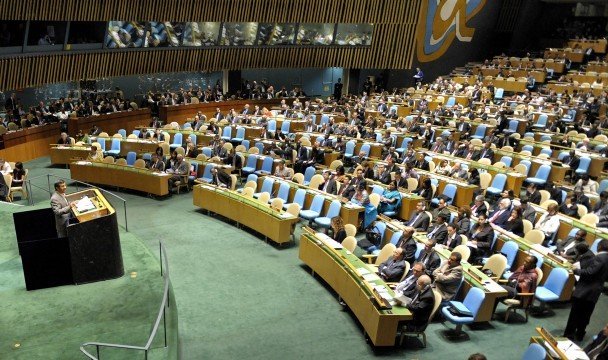 UNITED NATIONS: The United Nations General Assembly has stamped its approval on four resolutions aimed at strengthening regional and international peace and security presented by Pakistan.

The resolutions were recommended by the 193-member assembly’s Disarmament Committee where the texts were adopted by the overwhelming support of its membership.

The ‘Conclusion of effective international arrangements to assure non-nuclear-weapon states against the use or threat of use of nuclear weapons’ resolution was adopted by a vote of 125 in favour to none against, with 62 abstentions.

The resolution, titled ‘Conventional arms control at the regional and subregional levels’, was adopted by a vote of 183 in favour, with only India casting a negative vote. Four countries abstained.

The resolutions on “Regional Disarmament” and “Confidence-building measures in the regional and subregional context” were adopted by consensus.

Diplomats said the approval of the resolutions by the General Assembly was as an acknowledgement of Pakistan’s commitment to promoting the objectives of regional and global disarmament as well as strengthening international peace and security.

At a time of growing mistrust and rising tensions in various regions of the world, especially in South Asia, regional approaches to disarmament to strengthen peace and security had assumed greater relevance and significance, they said, noting that the General Assembly has long recognised that international peace and security was co-dependent on stability at the regional and sub-regional levels.

International efforts towards disarmament and arms control were reinforced and complemented by regional approaches towards this end, it was pointed out.