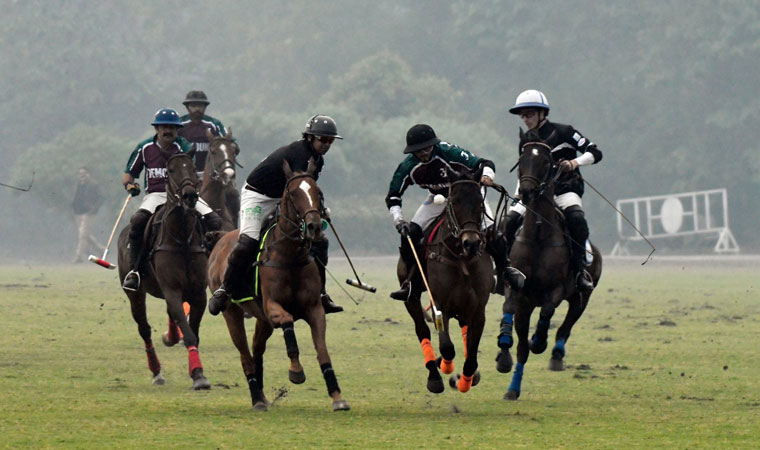 LAHORE: Imperial Hydroponics and Diamond Paints/FG teams carved out contrastive victories in the Hamdan Cup for Lahore Open Polo Championship at the Lahore Polo Club Ground here on Wednesday. The first match of the day proved to be a thrilling encounter where both the teams went head-to-head and after a tough fight, Imperial Hydroponics emerged as
winners by beating Pricemeter.pk/Kalabagh by 5-4. Imperial Hydroponics dominated the match right from the word go as they first fired in a field goal and then converted a 40-yard penalty to gain 2-0 lead. Both the sides fought well against each other in the second chukker but Pricemeter succeeded in converting a field goal to make it 2-1. Imperial Hydroponics started the third chukker with another field goal to stretch their lead to 3-1. Pricemeter then bounced back in style and thrashed two back-to-back goals to level the score at 3-all. In the fourth and decisive chukker, both the teams matched fire-with-fire till the end and converted one goal apiece to square the things at 4-all. It was now anyone’s match and in the dying moments of the encounter, Imperial Hydroponics got a 40-yard penalty, which was successfully converted by James Fewster, which guided them to a close 5-4 triumph.James Fewster emerged as top scorer as he hammered all the five goals for the winning team, while from the losing side Mannuel Carranza hammered a hat-trick and Ahmed Ali Tiwana struck one. Amirreza Behboudi, Emilio Novilo and Agha Musa Ali Khan officiated the match as field umpires.

The second match between Diamond Paints/FG Polo and Remounts proved to be a one-sided affair, where the former comfortably thrashed the latter by 8-2. Tom Brodie was the man behind this convincing victory as he cracked a quartet from the winning side while Mian Abbas Mukhtar and Mir Huzaifa Ahmed also played significant roles in their team’s triumph by converting a brace each. From the losing side, both the goals were scored by Jamie Le Hardy.

Remounts opened their account with a field goal to take 1-0 lead. But this couldn’t last long as Diamond Paints/FG bounced back well and slammed three back-to-back goals to gain 3-1 lead. Diamond Paints/FG converted one more goal in the second chukker to enhance their lead to 4-1. They further maintained their supremacy in the third chukker and added three more goals in their tally to gain a healthy 7-1 lead. In the fourth and last chukker, both the teams converted one goal each. Diamond Paints/FG won the encounter by 8-2. Ahmed Ali Tiwana and Mannuel Carranza supervised the match as field umpires.