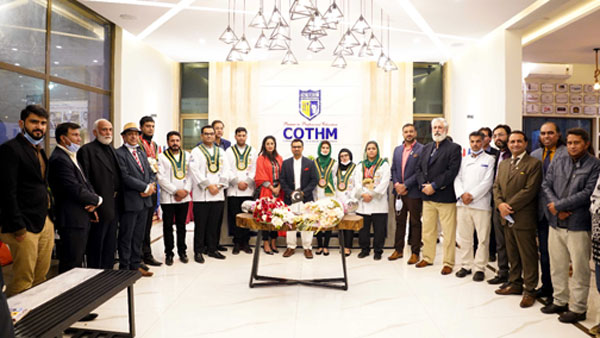 The newly selected members of National Culinary Team of Pakistan (NCTP) were also conferred with prestigious belts by Mr Ahmad Shafiq at COTHM New Garden Town Campus. Notably, the members were selected during the annual trials. The candidates who managed to make up to the finals include Shehroz Babar, NaveedAkhtar, Hadia Tariq, MahamTanveerHussain and Muhammad HaseebZahid.

The National Culinary Team of Pakistan will participate in international culinary competitions around the globe and will play a vital role in promoting the soft image of Pakistan internationally. Representation at international forums through such ventures will reinforce our identity as proud people of substance.

Notably, the Chefs’ Association of Pakistan (CAP), member of World Association of Chefs Societies along with its strategic partner the College of Tourism & Hotel Management (COTHM) launched the country’s first National Culinary Team of Pakistan on 5th January 2016.