For Dolce & Gabbana, no crying over crisis, be inventive 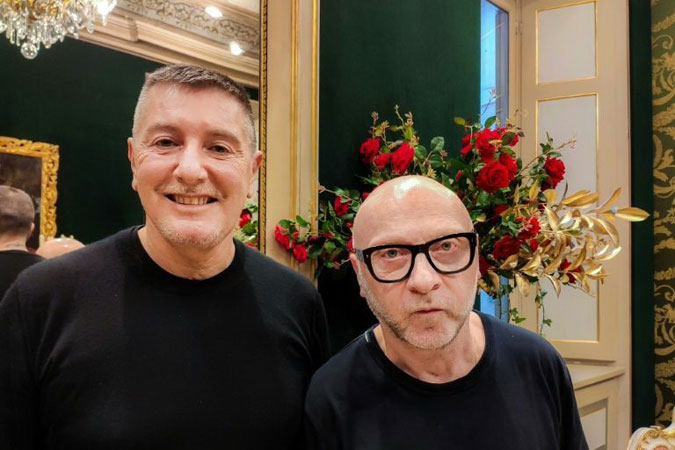 The coronavirus crisis has upended the norms of the fashion world, but Italian designers Domenico Dolce and Stefano Gabbana believe it has spurred them to be more inventive and resourceful.

With star-studded runway shows and in-person appointments now very difficult, the pair say they have been forced to hustle, recalling their early days in the mid-1980s.

Dolce, 62, and Gabbana, 58, spoke to AFP from an opulent Milan mansion where a series of mini-films for their upcoming haute couture collections were being shot.

These videos, based around the theme of family, will be broadcast online from Monday as an alternative to the customary catwalk show.

Q: How as designers are you getting through this very particular period?

Stefano Gabbana: “Domenico and I are two positive people, we’re not discouraged by the fact that we can’t do certain things. But of course everything is more difficult.

“But I have to remind you that when the brand was launched in 1984, we only had three million lire (1,500 euros/$1,824). We made coats from fleece because we couldn’t make them in cashmere, we made clothes in jersey because we didn’t have the money to buy more precious fabrics. It’s a situation that can be compared to today: we can’t buy this, we can’t do this.

“It sharpens inventiveness. When Domenico and I are under pressure, we give our best. We love challenges.”

Domenico Dolce: “This is part of ‘Italian-ness’. We are truly 1,000 percent Italian. In times of disaster, you have to be inventive, creative, don’t stop, don’t cry over your fate, you have to react, with optimism, positivity.”

Q: The situation is complicated for the luxury sector, which this year will see sales fall by more than 20 percent worldwide. How is it going for your fashion house?

Stefano Gabbana: “Most of the work is done online. In some countries the shops are open, like in China. In others, they’re not, especially in Europe and the United States.

“We’ve seen 170 percent growth in four months in e-commerce, because everyone buys this way. There is a positive side to this situation, we are adapting to a new mode of buying, which was already highly developed in the United States and South America.”

Q: How were you able to create this haute couture collection?

Stefano Gabbana: “We have all human resources in-house, the designers, the embroiderers, everything is done in Milan. We managed to do it slowly, we weren’t sure we could do it.”

Domenico Dolce: “The haute couture shows are usually planned six months or even a year in advance… We asked ourselves: what’s important at the moment? To do a classic fashion show seemed a bit useless, a bit sterile.

“In the beginning, Stefano was in favour of doing something, I was a bit against it. I didn’t want to do anything, but he insisted. For us, this collection was therapeutic. Maybe this situation that blocked us on one side unblocked us on the other. We felt free to break the rules.”

Stefano Gabbana: “We’ve offered rather classic clothes, like a little black dress, for more mature women… for the younger ones we broke everything that could be broken and we rebuilt it, in a completely new way.”

Q: Has the crisis changed the way you work?

Stefano Gabbana: “We had too much to do (before), the pace was frantic, now it has slowed down.”

Domenico Dolce: “There was this anxiety about doing things, of running out of time. Now — and this makes us very happy — we have time to think. We are back like we were in the years 1985-86…. We’ve rediscovered the happiness of savouring our work.”