Electronic waste: the dark side of industry 4.0 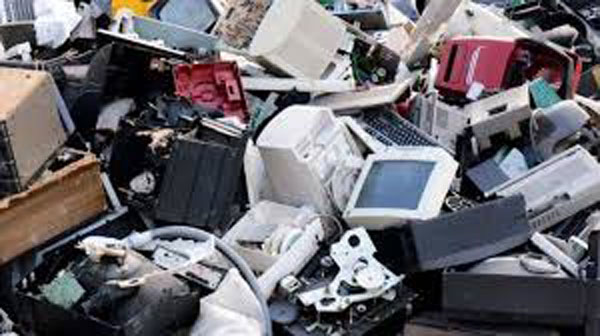 The world is rapidly embracing the various dimensions of Industrial Revolution (IR) 4.0 through the application of Internet-of-Things (IoT), artificial intelligence, cloud computing, block chain technologies, etc. in diverse industries. Contemporary to its devastating impacts on the global economy, the COVID-19 pandemic has served as a driving forcefor the adoption of digitalization and automation by business operations. Digitalization is being termed as synonymous to green development, but that is not the only side of this digital era. Unprecedented and accelerating amounts of Electronic Waste (e-waste) e-polluting the world’s land, water, and air along with endangering human lives shows us the dark side of digitalization.

The United Nations have defined e-waste as the waste generated when an electronic appliance or device has served its useful life and ends up being discarded without being recycled. The United Nation’s Global e-waste Monitor 2020 Report found that the world dumped approximately 53.6 million tons of e-waste last year. If the wastage pattern continues like this, the global e-waste is estimated to reach 74 million tons by 2030. Just like the rest of the global problems, the issue of e-waste is also more profound in the developing countries as opposed to the developed countries. In fact, the developed countries are using the developing countries as ane-easte dumping ground by exporting millions of tons of e-waste in the form of second-hand electronic equipment or scrap. Pakistan is one such country that imports huge amounts of both new and used electronic equipment which ultimately ends up worsening the country’s natural environment even further.

In the fiscal year of 2018/19, Pakistan imported an estimated US$3.7949 billion worth of “consumer durables” which includes all types of electrical appliances and equipment. In addition, the country imported US$1.132 billion worth of telecommunication equipment. The lack of recycling or improper disposal of this electronic equipment will convert it into e-waste at the end of its life cycle. Informal e-waste collectors in low-income countries, like Pakistan, are facing one of the worst professional health hazards. In the process of manually extracting the high-value metals from various electrical equipment, they hammer and burn electronic components which release toxic fumes, making them vulnerable to life-threatening diseases. The dumping of unused scrap releases toxic and chemical waste leading to serious health complications among the surrounding population.

This dark side of digitalization is outweighing the benefits that are gained through the digitalization of various business operations. e-waste is a serious threat to the development of a Clean and Green Pakistan since it creates direct obstacles in the attainment of the UN’s Sustainable Development Goals (SDGs) 2030. It is contradicting the SDGs of good health and wellbeing, clean water and sanitation, sustainable living communities, green economic growth and responsible consumption and production. Pakistan is a signatory to the Basel Conventionwhich states that the processing of e-waste is to be done responsibly and sustainably.Then, why are we stillstruggling to survive in an environment plagued with the hazardous fumes of various non-recycled electronic equipment?Our country cannot move forward on the path of sustainable development unless we adopt digitalization by embracing the benefits and mitigating the threats it may pose to our society. Adopting new technologies cannot make us a developed country unless we learn how to use it sustainably and in an environmentally conscious manner. The Government of Pakistan should educate the concerned stakeholders on this important issue and develop actionable plans for mitigating this dire environmental threat.