Seven patients die after hospital runs out of oxygen supply 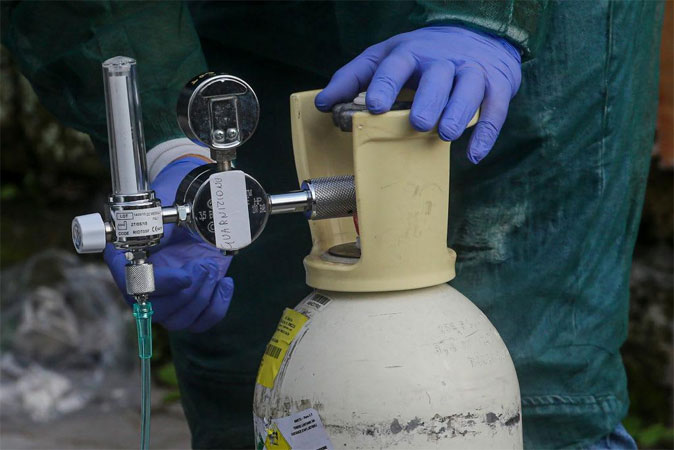 Seven patients, including six patients of Covid-19, passed away at Khyber Teaching Hospital (KTH) on Saturday night after the hospital ran out of oxygen supply.

Hospital sources disclosed that patients in other wards of the hospital are also facing difficulties due to the absence of oxygen cylinders.

He said that patients are in more need of oxygen during winters, adding that the hospital is carrying out a probe to find out why the cylinders did not arrive in time. Khan further said that the hospital’s director had formed an investigation committee that would be looking into the incident.

According to hospital sources, the Khyber Teaching Hospital’s central oxygen plant has the capacity to store 10,000 litres, that are supplied by a company called BOC in Rawalpindi. Sources added that due to the ongoing Covid-19 outbreak, oxygen cylinders were being supplied to hospitals across the province, and it was because of the high demand that the supply run got delayed.

Following the incident, Khyber Pakhtunkhwa (KP) Chief Minister Mahmood Khan directed the provincial chief secretary and health minister to order a probe into the incident, to be conducted by the hospital’s board of governors, and have the inquiry completed in 48 hours. “If the investigation is not completed within the stipulated time, the provincial government will hold an independent inquiry itself,” he warned.

KP Health Minister Taimur Jhagra tweeted about the incident, saying that he has directed the hospital’s board of governors to complete an inquiry and take action within two days.

“There was an incident at KTH last night involving a shortage of oxygen supply. I have directed the BoG to conduct an immediate inquiry & take action within 48 hours. If found unsatisfactory, or if otherwise required, the government will immediately order its own independent inquiry,” he tweeted.

“All the facts of the case will be made public. A request meanwhile to not circulate unverified information on social media. Neither this, nor any other incident will be left unused, to improve the health system; it’s service; and it’s system of accountability and transparency,” he tweeted.

Addressing a news conference along with Special Assistant to the Chief Minister on Information Kamran Bangash in Islamabad on Sunday, Taimur Jhagra said that provision protection to the lives and properties of the general public is the prime priority of the government.

He expressed deep sorrow over the loss of precious lives in Khyber Teaching Hospital. He said that the incident occurred due to lack of oxygen and this will be probed transparently and the system will be improved to prevent repeating such incidents in future.

He urged the people of Khyber Pakhtunkhwa to strictly observe precautionary measures to contain the spread of the second wave of Covid-19. He said the provincial government is committed to strictly implement SOPs and Implementation of SOPs will be observed next week.