‘Que pasa, New York?’: John Lennon and the city that set him free 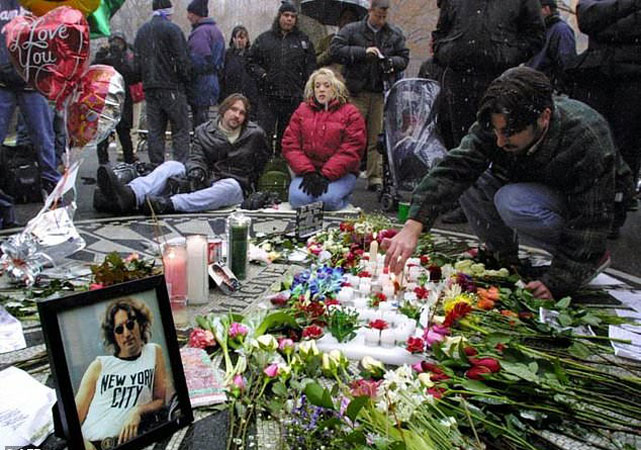 On December 8, 1980 the filigree gates of New York’s Dakota residence across from Central Park went down in history as the spot John Lennon was shot dead.

But for nearly a decade prior to his shock murder, the former Beatle’s adopted hometown was where he rediscovered life.

The New York Lennon moved to in 1971 was near economic collapse, struggling with rampant crime and entrenched poverty.

Yet it was a city flush with artistic energy that maintained a blase attitude towards celebrities, where the already legendary musician could grab a coffee at his corner “Cafe La Fortuna” without facing mobs.

And he strolled hand in hand with his wife Yoko Ono, free from the British tabloid racism the Tokyo-born conceptual artist once called “inhuman.” “We really felt like we were on the same page with New Yorkers,” Ono, now 87, said in the 2010 documentary “LENNONYC.”

“I’ve met a lot of New Yorkers who complain about it, but nobody moves out,” Lennon said.

“It’s the greatest place on earth.”

The couple moved to 105 Bank Street in Greenwich Village, a neighborhood by then well-known as the haunt of creatives.

“He didn’t want to be John Lennon, former Beatle, famous guy,” said Susan Ryan, a Bronx resident and writer who conducts Beatles walking tours in the city. Standing in front of the two-room basement flat, Roger Middleton — the current tenant for 25 years, who once hosted Ono for a visit — was typically cool about sleeping where Lennon once did.

“You just are cognizant of the legacy,” the 79-year-old said. “And it becomes an everyday thing.”

Lennon and Ono quickly fell in with the era’s leftist radicals, releasing in 1972 “Some Time in New York City,” a politically charged album centered on racism, sexism and incarceration.

The FBI began wiretapping the artist over his activism as the Richard Nixon administration ordered his deportation, a demand that mushroomed into a years-long legal battle. It wasn’t until 1976 that he secured permission to stay. “Que pasa, New York?” Lennon sang on that album, paying homage to his new environs and referencing the case. “If the Man wants to shove us out / We gonna jump and shout / The Statue of Liberty said, ‘Come!'”

During the songwriter’s standoff with the US government Bob Gruen thought to photograph Lennon flashing a peace sign in front of Lady Liberty, a now iconic picture.

Gruen’s classic images of Lennon also include the superstar sporting his signature circular glasses and long wavy locks, in a muscle shirt emblazoned with the words “New York City.” Gruen said Lennon was a delight to photograph for obvious reasons but emphasized the singer “was always turning words into puns and making jokes.” “I would’ve loved to have seen what John would do on Twitter nowadays, because he was so good with the one-liners,” the 75-year-old said.

Allan Tannenbaum, whose work includes intimate portraits of Ono and Lennon, also noted the musician’s wry humor, which flecked even poignant moments. He recalled taking stills while the pair filmed a video, undressing completely to “simulate making love.” Lennon kissed Ono, “going and going and going,” Tannenbaum said, until the Liverpool-born artist turned and said “What is this, Ben-Hur?” referring to the nearly four-hour long film with an expletive. “That broke the ice, everybody cracked up,” Tannenbaum recalls. “And I have the photo of that moment, him with a big grin on his face while he’s on top of Yoko. And she’s laughing. It was the best.”

That photo shoot in November 1980 came as Lennon was returning to music, weeks earlier releasing with Ono “Double Fantasy” — what would be his final studio album released in his lifetime.

Five years earlier the couple’s son Sean was born, approximately nine months after they reconciled following a break known as Lennon’s “lost weekend.” The pair reunited backstage at what went down as his final public concert appearance in 1974 at Manhattan’s famed Madison Square Garden, where he gave a surprise performance with Elton John.

After his second son’s birth Lennon took refuge at the Dakota, the chateauesque Upper West Side building where stars including Lauren Bacall and Judy Garland once lived. Lennon and Ono had moved there in 1973, seeking increased security their Village flat couldn’t provide. “I looked after the baby, and I made the bread, and I was a house husband,” Lennon said of his nesting years. “And I’m proud of it.”

The history of the co-op building erected in 1881 would soon be marred by the hollow-point bullets that took Lennon’s life, later perfumed by the flowers from fans and mourners who gathered there in the days and years to come.