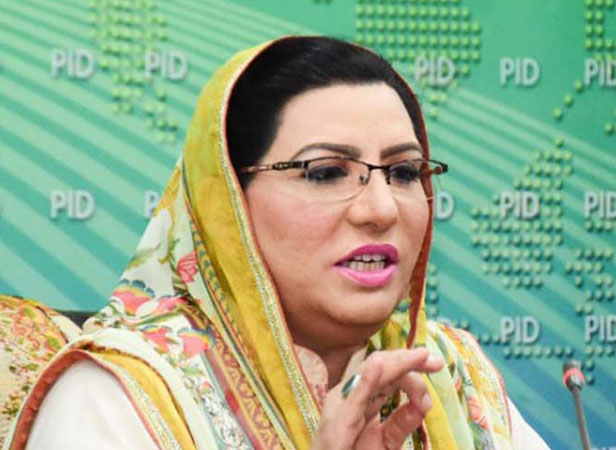 Special Assistant to Punjab Chief Minister on Information, Dr Firdous Ashiq Awan has said that the opposition parties that remained in power for decades have crippled the country’s economy, institutions and political system, and made the people political slaves.

Dr Awan said this on Saturday while talking to the media persons after addressing an event organised in connection with World Disability Day under the aegis of a non-governmental organisation (NGO).

Firdous said that the PTI has entered into the corridors of power in a constitutional way and its government can’t by toppled by mere wishes of Pakistan Muslim League-Nawaz (PML-N) Vice President Mariyam Nawaz.

She said that the entire leadership of Pakistan Democratic Movement (PDM) is morally handicapped. These people have fallen into enmity to such an extent that they are playing with the lives of their own workers for the sake of their nefarious intentions and to save their looted money, she added.

She said that under the leadership of Prime Minister Imran Khan that day is not far when institutions and people will be set free from political slavery. She said that the government is least bothered about the threats by opposition.

The opposition should not waste its energy and precious time of the nation by holding the rallies; instead, it should adopt a constitutional way and bring a vote of no-confidence against the government, she advised.

Earlier addressing the function, Dr Awan said that it is a mission of the Pakistan Tehreek-e-Insaf (PTI) government to uplift the downtrodden and weaker sections of the society as all the government policies revolve around them.

She said that the Punjab Chief Minister Usman Buzdar initiated different projects on the pattern of Rayasat-e-Medina and recently inaugurated Bahimat Buzurg programme for the welfare of weak and elderly people. She said that first ever special education policy has been approved in the history of the province under which a comprehensive strategy has been evolved for providing education, health and other facilities to differently-abled children. She said that 585 teachers have been recruited in the special education department through the Punjab Public Service Commission. She said that the government has provided 51 buses at a cost of Rs330 million this financial year whereas 12 buses were provided last year to provide free travel facility to special students.

She said that the government has set up 9 new special education centres in Muzaffargarh, Rawalpindi, Bhakkar, Gujranwala, Sialkot, Sheikhupura, Khanewal and Layyah. Moreover, secondary schools for girls have been set up in Sahiwal and Bahawalpur and degree colleges in Sargodha and DG Khan as well. The government has also upgraded special education institutions in 14 districts of Punjab, she informed.

She said that free books have been provided in the libraries of 147 special education institutes of the province at a cost of Rs4 million. Modern courses are being introduced for special children to provide information technology and forensic science education to these children so that they may become useful citizens of the society, she added. She said that the Punjab government is providing free books to special students with a monthly stipend of Rs800, besides pick-and-drop facility, uniforms and hostel facility.