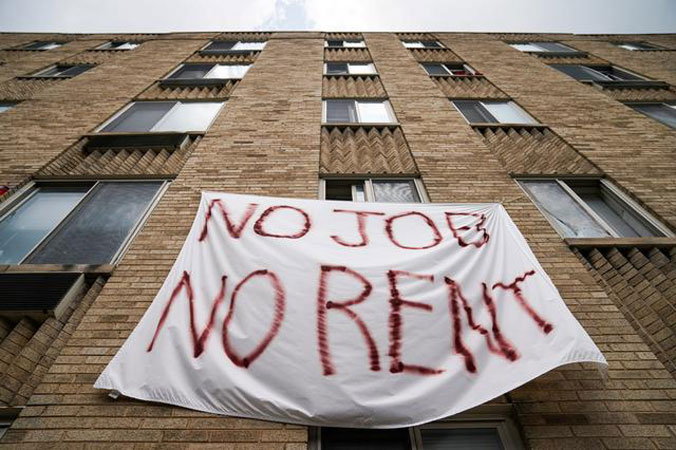 The record-breaking wave of US coronavirus infections may have pushed smaller businesses into a new round of layoffs as households pull back, new health restrictions take hold and a grim winter sets in.

High frequency data on employment across a range of industries has been weak, but for smaller firms suggests an outright loss of jobs in November, according to data and analysis from Homebase and UKG.

Other data points to a job market that may still be holding its own, including estimates by payroll processor ADP that small businesses added 110,000 jobs last month. Indexes of job openings from employment site Indeed and analytics firm Chmura both rose last week. New unemployment insurance claims for the week ending Nov. 28 fell to 712,000, the first decline in three weeks. The US government’s release on Friday of the monthly jobs report will document how employment overall fared in November, an important tell for the economy’s resilience against a pandemic that is now infecting a million people a week and on Wednesday caused a record daily death toll of more than 2,800. That sort of unchecked spread may threaten one of the goals that had been front of mind early in the pandemic – protecting the millions of small firms that are a major source of jobs, innovation, and local character, from the corner pizza shop to healthcare providers and technology start-ups.

Earlier programs that provided more than $3 trillion in economic support have ended, and even though elected officials are debating new assistance, the damage may be starting.

For the four weeks through Nov. 20, UKG’s data showed shifts worked across a variety of industries grew just 0.1%, bad news in itself for an economy still roughly 10 million jobs short of where it was in February and facing significant risks from a still-uncontrolled pandemic.

But even that masked what UKG Vice President Dave Gilbertson called an “alarming” trend, with businesses of fewer than 500 people cutting shifts by around 0.7%, and those with more than 5,000 workers expanding shift work by 4.6% – a potential blow to “Main Street” from a health crisis that has propelled behemoths like Amazon.com Inc.

Data from Homebase, which manages employee time for small firms and particularly restaurants, showed declines in recent weeks in the number of firms open and the number of employees working, and “we expect conditions to worsen,” the company said in a recent report.

According to restaurant reservations site OpenTable, the number of seated diners at restaurants in early October had neared 70% of its 2019 level. It has been below 50% for the last two weeks. Estimates of visits to retail locations, culled from cellphone data by Safegraph and Unacast, have been largely stalled, but fell last week in what is typically one of the most crowded in-person shopping weekends of the year.

JPMorgan economist Jesse Edgerton said initial data from “Black Friday,” a traditionally busy shopping day that comes a day after Thanksgiving, showed a 33% drop in in-store credit and debit card spending from 30 million of the company’s cardholders. That’s not a final verdict for a holiday season that could still see record online sales, but troubling for small stores. Amid the pandemic “consumers appeared to shy away form physical stores,” Edgerton wrote.

They may also be running out of money. Enhanced federal unemployment benefits replaced lost income early in the pandemic, but are about to expire for many this month. Economists and Federal Reserve officials worry that whatever cash buffers had been set aside by families may be running out. An Oxford economics broad index of the recovery has been stalled below 80% for the past month, with its health measures in decline and estimates for demand and employment staying level at best.