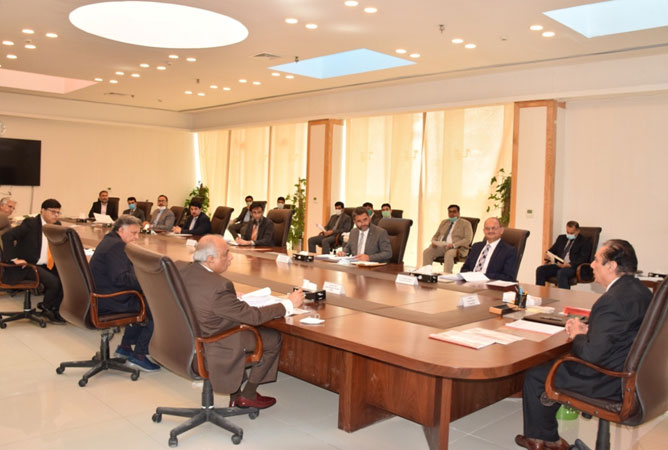 Honorable Justice Javed Iqbal, Chairman NAB said that NAB is determined to eradicate corruption in all its forms and manifestations as corruption is the mother of all evils. In order to further improve the quality of inquiries and investigations on the basis of solid and documentary evidence, NAB has started combine investigation Team (CIT) system in order to conduct inquiries and investigations comprising of one senior investigation officer, one junior Investigation officer, Additional Director investigation as case officer, legal counsel, financial expert, land revenue expert and forensic expert under the supervision of Director and DG concerned to benefit from collective wisdom. NAB has established its own Pakistan Training and Research Academy in which specialized training has been started to impart investigation officers as well as Prosecutors officers on modern lines in order to conduct investigations of cases of money laundering and white collar crime cases. NAB has also established Anti Money Laundering Cell in NAB headquarters as well as witness handling cells in all the regions to improve the standard and quality of investigations as per law.

NAB is regularly reviewing the performance of NAB through computer based specially devised state of art monitoring and evaluation systems but also physically inspecting through Chairman NAB’s Inspection and Monitoring Team (CIMT) to further review overall performance of NAB. On the instructions of Chairman NAB, Special complaint cells have been established in NAB Headquarters and all bureaus to listen to the complaints of the business community as NAB has great regard for the business community which play a vital role in the development of the country. Moreover, Honorable Hussain Asghar, Deputy Chairman NAB has life long experience in investigation of white collar crime cases. Similarly, Zahir Shah, DG Operations NAB and all DGs of Regional Bureaus of NAB are working very hard to ensure conduct of complaint verifications, inquiries and Investigations in an analytical way in order to overcome the shortcoming if any well in time. NAB intends to incorporate experienced legal counsel, prosecutors, deputy prosecutors and additional prosecutor general in its legal team in order to have vigorous prosecution of the Honorable Courts. NAB. Most importantly, Investigation Division and Prosecution Divisions of NAB under the supervision of Honorable Hussain Asghar, Deputy Chairman NAB and Syed Asghar Haider, Learned Prosecution General Accountability (PGA), NAB under the dynamic leadership of Honorable Mr. Justice Javed Iqbal, Chairman NAB are absolutely committed to root out corruption so that corrupt should be brought to justice and looted money should be recovered and deposit in national exchequer as per law.

Honorable Justice Javed Iqbal, Chairman NAB has said that NAB is the focal organization of Pakistan under United Nations Convention against Corruption (UNCAC) as Pakistan is signatory of UNCAC. Pakistan is the only country in the world to which China has signed a memorandum of understanding (MoU) for eradication of corruption. Pakistan and China are now jointly working for ensuring transparency in China Pakistan Economic Coordination CPEC projects. He said that World Economic Forum Report, Transparency International, Pakistan, PILDAT and Mishal Pakistan has lauded NAB’s efforts to aware people about the ill effects of corruption for corruption free Pakistan. According to a survey of Gillani and Gallop Pakistan 59 people of Pakistan showed confidence in NAB. He said that NAB is the chairman of SAARC Anti Corruption Forum. This was a reorganization of NAB’s excellent work as NAB is considered as a role model among SAARC countries. He said that he signed a Memorandum of understanding (MOU) with the Higher Education Commission to aware students of Universities/Colleges about the ill effects of corruption at an early age as youth is the future of Pakistan. In this regard, Character Building Societies (CBS) have been established in Universities/Colleges throughout the country.

Chairman said that NAB’s faith is Corruption free Pakistan and has chalked out anti corruption strategy of Awareness, Prevention and Enforcement. He said that NAB’s major focus is logical conclusion of mega corruption cases. Since NAB’s inception, one of NAB’s major achievements has been the recovery of around Rs.466.069 billion which is a great achievement as per the annual report of 2019 of NAB. He said that the overall complaints in 2019 were 53643 and processed 42760 whereas complaints in 2018 were 48591 and processed 41414. He said that NAB has established its state of the art Forensic Science Laboratory in NAB Rawalpindi. In 2019, 15747 questioned documents and 300 thumb impressions were analyzed in 50 cases and forensic analysis was carried out on 74 digital devices (Laptops, Mobile phones, Hard Disks etc). NAB has always accorded high priority for training/capacity building of its Investigation Officers and Prosecutors on regular basis on modern lines as Training is a continuous process which is an effective tool for improvement and maintaining the quality of Investigation Officers and Prosecutors. He said that NAB recognizes the centrality of training as a tool of improvement and maintaining the quality of its manpower. The performance objectives of training programs will also be continuously evaluated so as to form a basis for subsequent review and improvements in future training needs. He said that NAB is committed to eradicate corruption by utilizing all its resources in all its forms and manifestations.