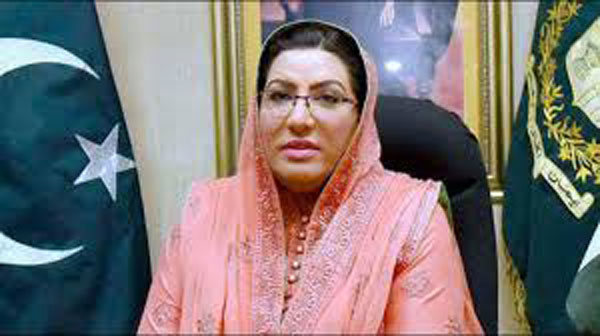 Special Assistant to Punjab Chief Minister on Information Dr Firdous Ashiq Awan has said that alliance of opposition parties – Pakistan Democratic Movement (PDM) – is endangering the lives of the people to save its looted money.

In a statement issued on Wednesday, Dr Firdous Ashiq Awan said that the situation is deteriorating day by day as the number of confirmed cases is increasing with each passing day. She said that coronavirus is a bitter reality and the opposition needs to realise this fact. The public meetings of PDM are resulting in increasing Covid-19 cases, she claimed.

While giving details of the latest corona situation in the province, she said 727 confirmed cases have been reported and 25 patients have died during the last 24 hours. She said the number of active Covid-19 patients is 19,000 and a total of 3,091 patients have died in Punjab, she added.

She said that holding public meetings in this situation is sheer enmity with the people. The opposition should refrain from putting the lives of innocent people in danger, she further said.

Coming down hard on the opposition, she said, “The queen of Jati Umra and her political bondwomen are unnerved after the mini Multan meeting. The queen and her slaves are in a state of self-deception and fear while the darling prince is sitting-pretty. Those who staged political jugglery are soon going to become a laughing stock.”

Commenting on Ishq Dar’s interview to BBC, she said that the interview of “international money launderer” Ishaq Dar was full of lies. “Ishaq Dar spoke truth out of fear and Sharif’s politics has been exposed again,” she added. She said that those who looted Pakistan for 30 long years are not leaders but looters and the 220 million people can never forget the continued loot and plunder of the families of the prince and the queen.