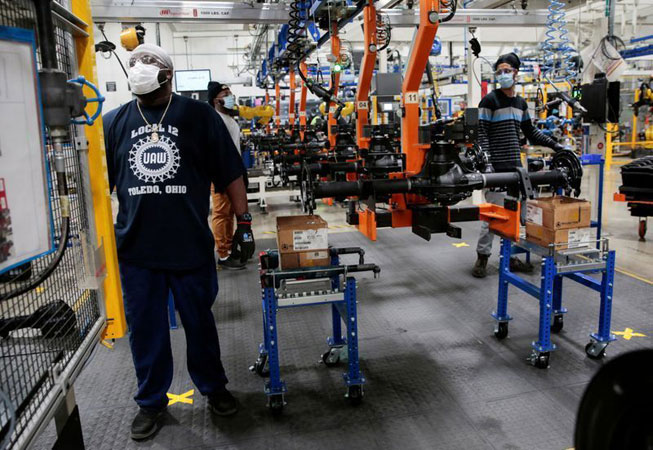 US manufacturing activity slowed in November, with new orders retreating from their highest level in nearly 17 years, as a resurgence in COVID-19 cases across the nation kept workers at home and factories temporarily shut down to sanitize facilities.

The Institute for Supply Management (ISM) on Tuesday warned that absenteeism at factories and their suppliers as well as difficulties in returning and hiring workers would continue to “dampen” manufacturing until the coronavirus crisis ended.

The softening in factory activity supports expectations for a sharp deceleration in economic growth in the fourth quarter.

“The feared economic slowdown is starting, but it is pretty slow off the blocks,” said Joel Naroff, chief economist at Naroff Economics in Holland, Pennsylvania.

The ISM’s index of national factory activity dropped to a reading of 57.5 last month from 59.3 in October, which had been the highest since November 2018. A reading above 50 indicates expansion in manufacturing, which accounts for 11.3% of the US economy.

The United States is in the grip of a fresh wave of COVID-19 infections, with more than 4 million new cases and over 35,000 coronavirus-related deaths reported in November, according to a Reuters tally of official data. The virus is likely to disrupt production at factories. Manufacturing output is still about 5% below its pre-pandemic level, according to the Federal Reserve.

Coronavirus infections are exploding at a time when more than $3 trillion in government COVID-19 relief has run out. The fiscal stimulus helped millions of unemployed Americans cover daily expenses and companies keep workers on payrolls, leading to record economic growth in the third quarter.