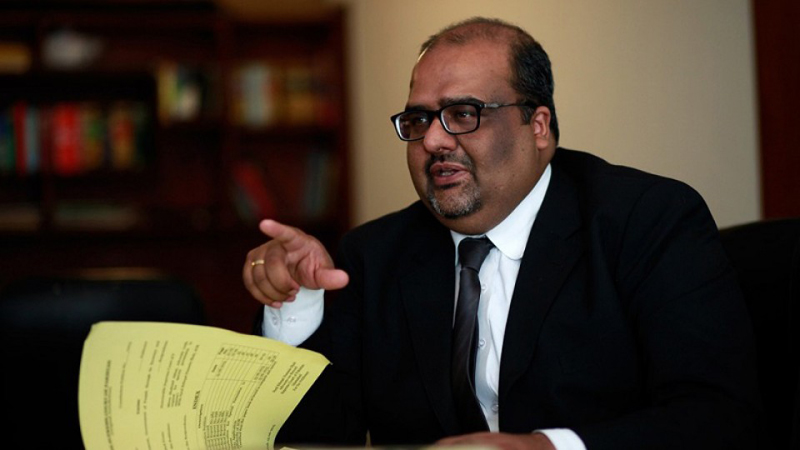 Addressing a news conference in Islamabad flanked by Special Assistant to Prime Minister for Political Communication Shahbaz Gill, he said Pakistan has written a letter to UK to cancell the visa of Nawaz Sharif which was issued for medical treatment after taking an undertaking. The six month visa has not yet been extended by UK.

“Negotiations were continuing with UK for the deportation of Nawaz,” he said adding that the last two governments did not make effort to deport former head of Mutahida Quomi Movement (MQM) Altaf Hussain from UK.

Shahzad Akbar said PML (N) leader and former Finance Minister Ishaq Dar stood totally exposed in the recent BBC interview. The interview made it clear as to why Dar was an absconder and not appearing before the courts. Castigating Ishaq Dar, he said Dar had wrongly said that he has only one property in Lahore, whereas the former finance minister has properties/bank accounts in Pakistan as well as in Dubai. The British authorities have also been requested for the extradition of Ishaq Dar.

He wondered why Dar had brazenly leveled baseless allegations of custodial killings on NAB. “It is incomprehensible that on whose orders Dar agreed to get interviewed by BBC. It was a desperate effort to negate accusations leveled against him.” The opposition has miserably failed to gather a few thousand people in Multan on Monday last. They had managed to gather only a small number of people in their public meeting. Opposition was now trying to hold another small gathering “Jalsi” in Lahore. They have endangering the lives of the people by exposing them in crowds. He said the people are also not attending the public gatherings of the opposition parties in large numbers. The opposition parties must act responsibly and stop playing with the lives of the people as the second wave of Covid-19 is proving to be more fatal. People have forgotten people like Ishaq Dar. The recent results in Gilgit-Baltistan have proved that Pakistan Tehreek-e-Insaf was still the most popular party in the country.

Speaking on the occcasion Special Assistant to Prime Minister on Political Communication Shahbaz Gill said Ishaq Dar was trembling while being interviewed. Country’s enemies including Pakistan Muslim League-Nawaz leadership were trying utmost to declare Pakistan a fascist country. Their nefarious designs had already been foiled. Ishaq Dar in his interview said that the general elections in Pakistan were stolen – BBC anchor retorted PML-N should have filed an election petition. He said BBC was trying to interview Nawaz Sharif since long.The interview of Dar was combination of shamelessness and humilation. In Pakistan, he said Ishaq Dar enjoys the status of midwife in money laundering. Dar should come back to Pakistan and can give interview to Pakistan media but he would have to clear himself from corruption cases.