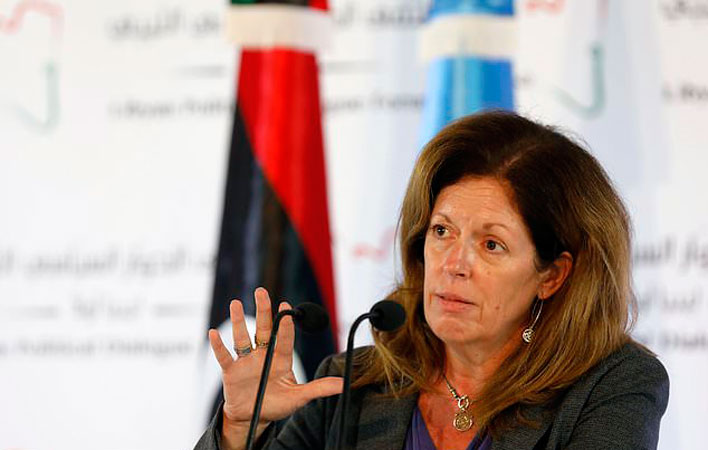 The top U.N. official for Libya said Wednesday there are at least 20,000 foreign fighters and mercenaries in the war-torn nation, and warned of a “serious crisis” as weapons continue pouring into the North African country.

“That is a shocking violation of Libyan sovereignty … a blatant violation of the arms embargo,” U.N. acting envoy for Libya Stephanie Williams told an online meeting of the Libyan Political Dialogue Forum.

The 75-member forum is trying to get Libya’s warring sides to agree on a mechanism that would establish a transitional administration to lead the country through presidential and parliamentary elections in December 2021.

The gathering is part of U.N. efforts to end the chaos that engulfed oil-rich Libya after the 2011 overthrow and killing of dictator Moammar Gadhafi. The country is now split east to west between two rival administrations, each backed by an array of militias and foreign powers. Military commander Khalifa Hifter rules the east and south, while a U.N.-supported government based in the capital of Tripoli controls the west.

Williams´ remarks reflect her exasperation over the lack of progress on the departure of foreign fighters and mercenaries from Libya, which was part of a cease-fire deal inked in October.

The cease-fire deal had set a three months´ deadline for foreign forces to leave Libya. Thousands – including Russians, Syrians, Sudanese and Chadians – have been brought to Libya by the rival sides, according to U.N. experts.

Williams also slammed unspecified foreign governments for “behaving with complete impunity” and deepening the Libyan conflict with mercenaries and weapons. Tensions in Libya escalated further when Hifter’s forces last year launched an offensive to take Tripoli. Their campaign collapsed in June, when militias backing the U.N.-supported government in Tripoli, with Turkish support, gained the upper hand, driving Hifter’s forces from the outskirts of the capital and several western Libyan towns.

Hifter’s side is supported by the United Arab Emirates, Russia, Jordan and Egypt, while the Tripoli forces are supported by Qatar and Turkey, a bitter rival of Egypt and the UAE in a broader regional struggle over political Islam.

Williams also warned about a looming “collapse of the electrical grid” in Libya because of corruption and mismanagement, adding that a $1 billion investment in the electrical infrastructure is immediately needed, given that only 13 of Libya´s 27 power plants are functioning.