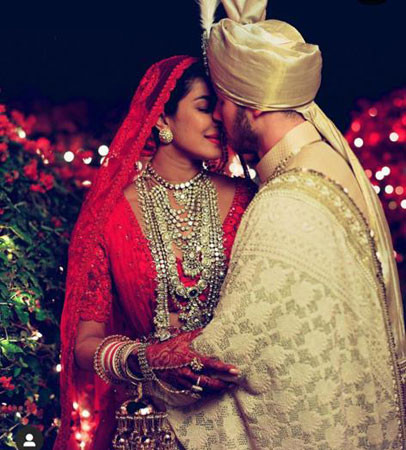 On Priyanka Chopra and Nick Jonas’ second anniversary, she has shared unseen pictures from their wedding. The couple tied the knot in a lavish ceremony at Jodhpur’s Umaid Bhavan Palace in 2018, in dual ceremonies.

Taking to Instagram on Wednesday, Priyanka shared five new pictures from the second of their two wedding ceremonies, which was held in accordance with Hindu traditions. She wrote in her caption, “Two years down… forever to go,” and added a heart emoji.

The first picture showed the couple holding each other closely, the second was a close-up of their hands, the third image showed Priyanka looking onward from behind the veil of her red lehenga, the fourth image was a side profile of her walking towards the ‘mandap’, and the final picture showed a large crowd during the varmala ceremony.

On Tuesday, both Priyanka and Nick had shared special posts for each other. “Two years married to the most wonderful, inspiring and beautiful woman. Happy anniversary @priyankachopra I love you,” wrote Nick on Instagram, sharing a couple of pictures from their Christian wedding ceremony. “Happy 2 year anniversary to the love of my life. Always by my side. My strength. My weakness. My all. I love you @nickjonas,” Priyanka captioned her post.

In a recent interview to People, Priyanka said that while she was fascinated with the idea of being a bride, she was not sure what the relationship really meant. “I loved the idea of being married, I was fascinated with the idea of being a bride when I was a child without realising what it really meant. But when I got in my 20s, I said I have got things to do, I didn’t know what it would have meant. When you find the right person, everything is so comfortable and not everything is the effort I thought it would be.” The couple will make a joint appearance for the 18th Hindustan Times Leadership Summit on Friday.