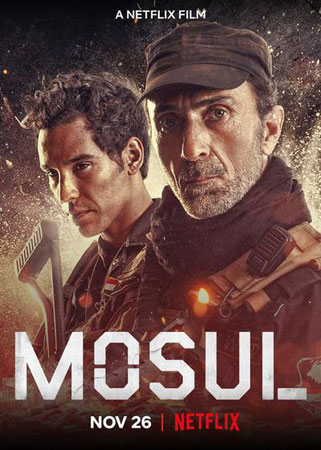 Mosul, a new war movie co-produced by the Russo brothers, is bookended by two terrific scenes.

This isn’t to say that the rest of the film is in any way underwhelming, but the sheer confidence with which debutant director Matthew Michael Carnahan handles the opening and closing moments of his movie, set in the twilight of ISIS’ hold over the titular Iraqi city, is exciting — especially since he is working in a genre that thrives on tropes.

The immediacy with which we’re thrust into the action almost makes it seem as if Netflix’s da-dum has melded into the sound of gunfire. Two men are cornered behind a wooden desk, fielding assault from all sides. There are dead bodies strewn about. It looks like they’re inside what used to be a shop, but it’s difficult to tell. An apocalypse appears to have been unleashed outside.

Just as the men — their uniforms suggest that they’re cops — are about to run out of ammo, we close in on them. Their faces confirm what we’re thinking. It’s over. But then, there’s a rapid burst of fire outside — quick, clinical — followed by a deathly silence. The men catch their breath, and with hesitant looks at each other, they peek over the desk behind which they’ve been hiding.

The enemy is dead, taken care of by group of heavily armed soldiers. They’re the legendary Nineveh SWAT team. The two cops have heard stories about this elite squad, whispered among the Iraqi people almost like fables about marauders of the past. After a brief interaction in which he lauds their bravery, the commander, Major Jasem, appoints the younger cop as the newest member of the SWAT team. He will be our surrogate in this brutal world.

His name is Kawa, and he has a lot to learn. For instance, he still believes in making arrests, an idea that Major Jasem puts an immediate end to. There will be no arrests as long as he’s in charge. Every last member of ISIS they come across must die — mercilessly, painfully, and preferably, without remorse.

Mosul unfolds across no more than 24 hours, as the Nineveh SWAT team trudges through the war-torn city to carry out a rogue mission.