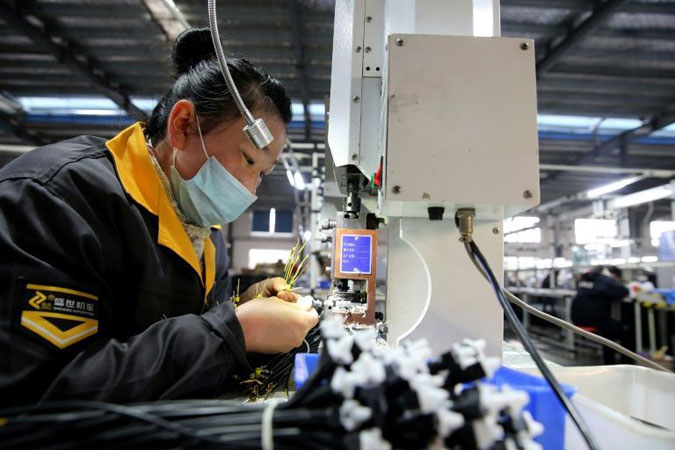 Asian factories recovered further in November from the COVID-19 crisis, surveys showed on Tuesday, thanks to a boom in economic powerhouse China which has enabled the region to withstand the pandemic better than many of its peers.

China’s factory activity accelerated at the fastest pace in a decade in November, a private sector survey showed, a sign the world’s second-largest economy is rebounding to pre-pandemic levels.

But a global resurgence in coronavirus infections has made the outlook highly uncertain, keeping governments and central banks under pressure to maintain or ramp up their massive stimulus programmes, analysts say.

PMI surveys for other regions due later on Tuesday are expected to show a continued recovery in factory activity in the euro zone, while US manufacturing activity is seen expanding but at a slower pace.

“There is little sign that large second waves of the virus in the US and Europe have weighed on Asia’s export-focussed industry, suggesting that external demand will continue to hold up,” Capital Economics said in a research note.

The gauge stayed well above the 50-level that separates growth from contraction for the seventh consecutive month. It was also in line with an official survey that showed activity at Chinese factories expanded at the fastest pace in more than three years in November.

A steady recovery in global demand also helped Japan’s factory activity move a notch closer to stabilisation in November, and that of South Korea to accelerate at the fastest pace in nearly a decade.

Asia’s performance comes as many countries in the region have had greater success in containing the virus than their US and European peers.

China’s economy is seen increasing 1.9% this year, while the US economy is expected to contract 4.3% and euro zone economies by 8.3%, according to the International Monetary Fund’s estimate in October.

The surveys on Tuesday showed factory activity also grew in Taiwan and Indonesia, a sign the pick-up in Chinese demand was underpinning the region’s economy.

The final au Jibun Bank Japan Manufacturing PMI hit 49.0 in November, up from the previous month’s 48.7 and a preliminary 48.3 reading.

South Korea’s IHS Markit PMI rose to 52.9 in November from 51.2 in October, the highest reading since February 2011 and marking the second month of activity expansion.

But India’s manufacturing recovery faltered in November as coronavirus fears weighed on demand and output, prompting firms to cut jobs for the eighth month in a row.

That underscored the patchy nature of Asia’s outlook, with some analysts still cautious on the outlook with global and domestic demand vulnerable to infection trends.

“Japan’s economy likely slowed in July-September but averted a contraction due to a pick-up in exports and the effect of government campaigns to prop up demand,” said Takeshi Minami, chief economist at Norinchukin Research Institute.

“But the economy may contract in January-March if households hold off on spending again. If service-sector firms suffering from plunging sales cut spending, that could hit jobs and capital expenditure.”