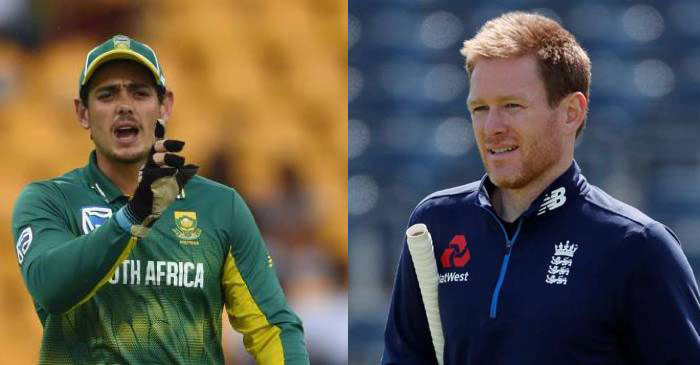 CAPE TOWN: You know, it’s beginning to look like England have got the hang of this white-ball stuff. After successfully completing their 50-over World Cup quest last year, they are now honing their competitive edge in the shortest format, ahead of back-to-back tournaments in 2021 and 2022. Victory in Paarl gave them a 2-0 lead with one to play, and extended their unbeaten run in T20I series to eight. Both wins over South Africa were hard-fought, and Quinton de Kock could rightfully point to “one or two small things” that cost his side at Boland Park. But England are increasingly battle-hardened, both through success on the pitch and competition within the squad. Dawid Malan, ranked the ICC’s No. 1 T20I batsman, came into the tour saying he couldn’t be certain of his place in the side ––- but after scores of 42, 21 and 19 (a relative trough in his 18-match career) he produced the sort of match-winning hand that has made him all but impossible to leave out.

Ignoring the vagaries of form and conditions, Eoin Morgan might already feel he is closer to knowing his best XI ––- although the difficulties being experienced by Jason Roy could represent a problem to chew on. The batting looks dangerous, and Morgan seems perfectly suited to the finisher’s role at No. 6; the bowling features two of England’s most-successful T20I bowlers, plus the effortless brilliance of Jofra Archer, and is bolstered by healthy competition among the rest of the seamers. Only the emergence of further spin options could fatten their goose.

For the hosts, times are tough for a variety of reasons. The burden on de Kock as the team’s leader, best batsman and wicketkeeper looks a heavy one, and they face a fraught 12 months of trying to settle on the right combinations to support a T20 World Cup challenge. To have victory snatched from your grasp is arguably harder to take than to not be in the running in the first place –– but as Morgan’s side would attest, reflecting on the experience of Kolkata 2016 or Cardiff 2017, you only learn by getting into those positions and then dealing with the consequences. South Africa went down 2-1 to England earlier in the year, knowing that the series could have gone the other way. It would be hard to find the same consolation in a 3-0 whitewash, so de Kock and Mark Boucher will be looking for a response back at Newlands and signs that lessons are being learned.

He has barely been in the role a year, but already de Kock seems a captain under the pump. His T20I win percentage is well below any of his permanent predecessors in the role ––- which must be all the more galling given his record with the bat has improved –– and the strain of captaining, opening and keeping seemed evident at the toss in Paarl, where he cut a distracted figure (broadcaster technical issues notwithstanding). The unique off-field pressures of the South African system mean he should get plenty of leeway but it remains to be seen whether he can inspire his players to produce better on the field.

The focus will doubtless remain on Roy and his attempts to fight his way out of the paper bag of poor form he finds himself in. But it’s also worth highlighting the success of Adil Rashid and what that means for England’s World Cup planning. Rashid’s 2 for 23 in the second T20I saw him pass 50 wickets in the format and draw level with Graeme Swann as England’s most-prolific spinner. The flight and snap have returned after shoulder problems in 2019, and probably helps justify his reticence over a potential Test return and increase in workloads. But with Moeen Ali currently out of the side, England’s reliance on Rashid serves to underscore a lack of depth in the position.

South Africa looked stronger overall in Paarl, particularly their bowling, but there remains scope for another rejig back in Cape Town. Jon-Jon Smuts would provide another spin option if drafted into the middle order, while Lungi Ngidi’s spot could come in for scrutiny after leaking 51 from his four overs. Andile Phehlukwayo and David Miller remain unavailable for selection. Despite having sealed the series, Morgan has said England will resist the temptation to experiment. However, a used pitch at Newlands might mean Moeen gets a chance as second spinner, while Mark Wood’s extra pace is another option – with Tom Curran and Chris Jordan both expensive in the first T20I.