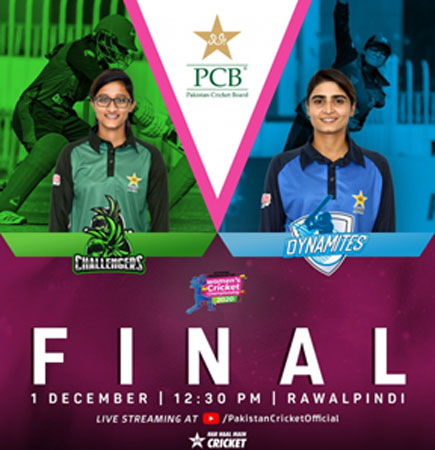 RAWALPINDI: PCB Challengers and PCB Dynamites will be aiming to annex the National Triangular T20 Women’s Cricket Championship trophy as well as PKR1million, the winning prize money, when they contest the tournament final at the Pindi Cricket Stadium on Tuesday (today). Muneeba Ali-led PCB Challengers overcame Rameen Shamim-led PCB Dynamites in the last group match, played on Sunday, by five wickets in a low-scoring contest, which turned out to be a rehearsal for the two finalists. The much-anticipated contest will be streamed live on the PCB’s YouTube channel and both captains are looking forward to it with an eye on the tournament trophy.

PCB Challengers captain Muneeba Ali said: “Our confidence is high and we are keenly looking forward to the final and lifting the trophy. It has been a team effort that has helped us dominate the event and I really feel we have it in us to finish the event with the trophy in our hands. We have played aggressive cricket and tried to impose ourselves on the opposition which has provided us success. We plan to play the same brand of cricket in the final without adding any extra pressure on ourselves.”

PCB Dynamites captain Rameen Shamim said: “We will surely bounce back in the final as we have learned from the defeat against PCB Challengers on Sunday. Our batting did not click in that match as we posted a low total but we still possess enough quality in our ranks to turn the tables on the day, which matters the most. Overall, it has been an exciting tournament where we have seen some good performances from our players. Our wicketkeeper has been doing a great job behind the stumps, which has uplifted our fielding unit. We all are focused on winning the trophy and it should be an entertaining final between two quality sides.”

The tournament has produced quality contests with the three teams fighting tooth and nail for their progression in the final. PCB Blasters crashed out of the tournament as they failed to win any of their four group matches. Their players, however, dominate the batting and bowling charts. Javeria Khan is the highest run-getter in the tournament to date with 134 runs in three matches at an average of 67, while Hafsa Amjad has the most scalps (four). Javeria is followed by the PCB Dynamites duo of Nahida Khan (115 runs at 57.50) and Ayesha Zafar (110 runs at 36.67) on which Rameen will be pinning hopes.