Prime Minister Imran Khan is committed to the cause of Kashmiris: Ambassador Munir Akram 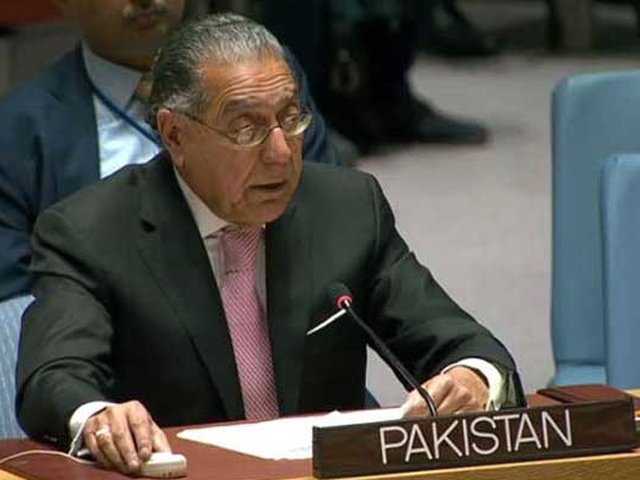 In an exclusive interview conducted in a webinar-style for Daily Times, I had the opportunity to speak with Pakistan’s Permanent Representative to the United Nations (UN) Ambassador Munir Akram in which several matters came into discussion, including the longstanding dispute of Indian occupied-Jammu & Kashmir (IoJ&K), India’s involvement in terrorist activities across Pakistan, the role of the United States in South Asia and performance of Pakistan’s diplomatic apparatus over the years.

Addressing the Kashmir crisis in the context of its future, Ambassador Akram stated that public opinion in the occupied valley is unanimously against India and its designs post-5th August 2019 actions yet at some stage, the Indians shall try to find some common ground subject to pressure. However, he pointed out that it looks difficult at this point given the adopted policies.

On Islamabad’s diplomatic campaign, the veteran diplomat emphasised the fact that global recognition of India’s human rights violation is increasing after concerted efforts. Yet he cautiously warned of a growing sense of fear if tensions continue to escalate between the two nuclear-armed neighbours in South Asia.

Moreover, he highlighted a rather abysmal stance taken by the international community in addressing the issue despite Pakistan’s mature and responsible restraint. The envoy pertinently pointed out that Pakistan should continue to take diplomatic steps with regards to the brewing conflict that could erupt either by design or by accident.

‘Once there is a realisation of the dangers posed by the existence of this conflict, we may find some movement on the diplomatic front. It’s a slow process that would require patience, perseverance and determination on our part as well as the Kashmiris,’ said the envoy.

Next, I asked him about the lacklustre diplomatic approach by Islamabad for a number of years apart from historical follies and New Delhi’s consistent refusal to talk, which coincides with its punitive actions across IoJ&K and the broader Indian region. On this, the veteran envoy had an interesting take in which he agreed that for over a decade, the state’s Kashmir diplomacy had been passive (putting it kindly) and the focus had been on bilateral approach. The drawback of which was that India’s narrative was pushed forward when it wrongfully tried to project Pakistan as a ‘terrorist state’. In his opinion, the situation in the disputed valley was more or less under control from India’s perspective until it unravelled after 5th August 2019 actions. The envoy further stated that this was all pre-planned and part of the BJP and RSS’ long-term ideological agenda that has changed the game for the worse.

‘Around the time, Pakistan was still hoping for dialogue yet the situation after February 2019 standoff and changing of IoJ&K’s status forced Pakistan to reactivate its lobbying efforts with the UN Security Council (UNSC) presiding over a special session in almost 50 years. This took a lot of courage given New Delhi’s significant influence amongst the P5 members. The impact of this session resulted in general recognition of India’s human rights violations and concerns on potential conflict,’ added Ambassador Akram.

He was also apt in mentioning that some major powers are geopolitically aligned with India for economic and security reasons which leaves limited choices for Pakistan. Yet at the same time, a proactive diplomatic approach must remain the norm regardless of these powers stance for a bilateral solution which has no grounds after last year’s drastic events which requires multilateral approach, as per his views.

When I asked him about appointing better diplomats owing to a passive approach adopted over the years (and regardless of Prime Minister Imran Khan’s personal measures which aren’t enough), Ambassador Akram gave a witty yet plausible response in which he both agreed and disagreed with my take. He did call for improvements in the diplomatic apparatus but recognised its international value and stature. In addition, he also mentioned the positive role played by the UN Human Rights Council (UNHRC) and the Organisation of Islamic Cooperation (OIC) in recognising the importance of the Kashmir dispute. As per his take, even some of the Western countries realise the importance but are unable to publicly speak out against India for certain reasons pointed out earlier.

He focused on the fact that PM Khan is consistent in pursuing right to self-determination for Kashmiris and that Pakistan’s diplomatic apparatus has remained active in pushing a robust narrative across key forums while also taking into consideration India’s geographical and political might.

When it came to the question on how Pakistan can sway global opinion on the damning dossier on terrorism against New Delhi presented by Foreign Minister Shah Mahmood Qureshi and DG ISPR Major-General Babar Iftikhar in light of India’s global standing and Pakistan’s historically dented image, Ambassador Akram at first stated that the dented image is being repaired rapidly especially in the last one and a half years through PM Khan’s consistent efforts which can be seen through the steps taken through speeches and actions taken at the UN and wider forums where global leaders recognised his contributions whether on debt relief, collective alliances or Kashmir itself.

On the Indian terrorism dossier, he mentioned about New Delhi’s hawkish yet sophisticated designs which were meant to harm Pakistan that are well-documented. Notably, the notion of hybrid warfare (often disregarded by sections of the media as fiction) came up to light through which Islamabad had been cornered for years by a gamut of Indian actions that were designed to sabotage the polity and economy of Pakistan.

Nevertheless, he strongly believed that India’s pristine image is very much under great stress and tarnished (calling it an illiberal democracy on a polite note) on which Pakistan’s diplomats shall continue to highlight across the board.

When it was asked whether the FATF would be approached to counter India in light of limitations at the UNSC, the veteran diplomat agreed that it could be approached on India’s financing of terrorism in Pakistan because it deals with illicit financing despite being an informal body.

‘While New Delhi could resist any efforts on presenting démarche in FATF, Pakistan should approach in any case and present its case at other world forums as well,’ it was stated.

Coming to the prospects of Biden presidency’s policies for South Asia on which Trump adopted a somewhat reconciliatory approach when it came to IoJ&K and Afghanistan, Ambassador Akram stated that one must understand America’s strategic direction and how to different it would be under Biden. He added that Trump’s mediation offer on Kashmir was off the cuff which was pushed aside by New Delhi. Nevertheless, it was notably pointed out that Biden and Kamala Harris have been critical of India’s policies in Kashmir and urged for a need to stop human rights violations. Yet it’s still early to predict any outcome which remains to be seen as per the envoy’s views.

As for Afghanistan, Ambassador Akram interestingly mentioned that both Biden and Trump have a similar stance for withdrawal while being supported by American citizens, albeit tactics and nuances might differ. However, in his opinion, all depends on the progress of the Afghan Peace Process whose outcome shall determine the direction of the longstanding conflict.

While discussing the comparison of UNHRC elections where Pakistan received 169 votes in 2020 elections while India received 188 votes in 2018 elections, Ambassador Akram mentioned that Pakistan always had to lobby and present its case whereas India uses its influence as a donor country to get votes of smaller countries which have to oblige in the end. This stark difference is the reason for fluctuation in votes and not every election gets more votes for New Delhi as in the Committee on Administrative and Budgetary Affairs, it received only 120 votes which is comparatively less.

When it came to fomenting ties with Latin America and the Far East for mustering support, I asked him about whether more could be done in light of last major interaction for Latin America being in General Musharraf’s era. On this, he pointed out budgetary constraints of the Foreign Office which is under-budgeted to handle such affairs. He mentioned that extended global diplomacy requires resources and expenditures on which the government has to prioritise in light of financial gaps. ‘Some progress on balance of payments/debt has been made but once the state is in a comfortable position, more money could be spent on such diplomacy,’ he added.

He fully lauded younger diplomats for their consistent efforts on overall diplomatic front and consider the Foreign Office in good hands under the millennials, which is quite rare for veteran diplomat to mention publicly.

On a final note, I asked him about Pakistan miserably losing the IPU elections held a couple of weeks ago where the Chairman Senate lost to an MP from Portugal. While he wasn’t aware of the case’s specifics since it’s not under the UN’s domain, he did stress on the fact that the candidate may have come in too late so should be placed in a timely manner.