President-elect Joe Biden suffered hairline fractures in his foot while playing with one of his dogs and will probably have to wear a protective boot for several weeks. 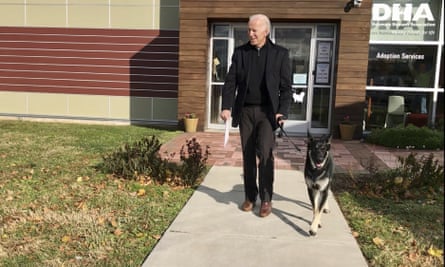 The incident happened on Saturday and Biden visited an orthopedist for x-rays and a CT scan in Newark, Delaware, his office said in a statement. Doctors initially thought he had sprained his ankle but ordered an additional scan of the injury.

Fractures are a concern generally as people age, but Biden’s appears to be a relatively mild one based on his doctor’s statement and the planned treatment. At 78 he will be the oldest president when he’s inaugurated in January; he often dismissed questions about his age during the campaign.

Reporters covering the president-elect were not afforded the opportunity to see Biden enter the doctor’s office Sunday, despite multiple requests. Leaving the doctor’s office to head to an imaging center for his CT scan, Biden was visibly limping, though he walked without a crutch or other aid.

Biden sustained the injury playing with Major, one of the Bidens’ two dogs. They adopted Major in 2018, and acquired their first dog, Champ, after the 2008 election. The Bidens have said they’ll be bringing their dogs to the White House and also plan to get a cat.

The president-elect and his wife, Jill Biden, fostered Major from a dog shelter in Delaware and made his adoption official in November 2018.

Champ lived with the Bidens on Capitol Hill in Washington DC during Barack Obama’s presidency, when the former senator for Delaware was vice-president.