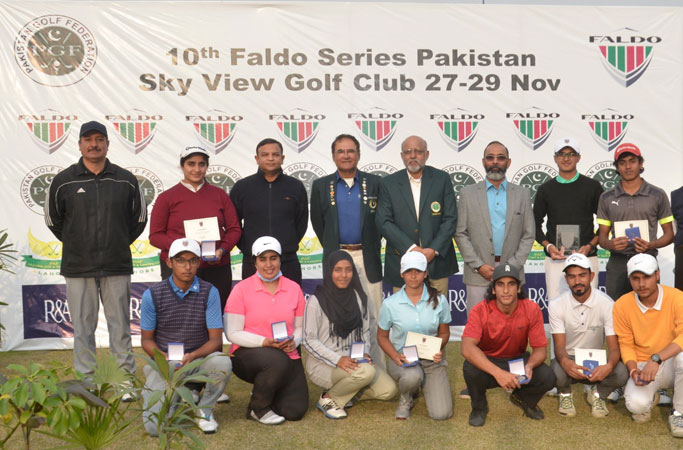 LAHORE: The three days trials for selection of a three-member boys team and two-member girls team for representing Pakistan in the Nick Faldo Series Grand Final, to be held in Hanoi, Vietnam in March 2021, came to an inspiring end at the wonderful PAF Skyview Golf Course here on Sunday. Out of sixty zealous and motivated young ones belonging to the age categories under-16, under-18 and under-21, most of whom had travelled to Lahore from Karachi, Peshawar, Rawalpindi, Islamabad and Kharian, participation in the trials was a purposeful experience and though only five achieved success, the others felt energised and motivated by the whole experience . Distinction and notability in these trials was achieved by Yashal Shah of Karachi Golf Club in the under-16 category. The high flier in the under-18 group was Mekayl Majid of Defence Raya while the whiz kid in the age bracket of under-21 was Nouman Ilyas of Lahore Garrison. As for the girls, the illustrious ones were Hamna Amjad (under-16) and Parkha Ijaz of Defence Raya (under-21). During the final round on Sunday, Yashal Shah turned out to be the boy of brilliance ending the round with a score of 71 and an overall aggregate of 222, thus managing to emanate as the foremost player of the three days trials. The runner-up in the under-16 category was his Karachi club mate Omar Khalid who played impressively but could not capture the top slot.

The under-18 top one turned out to be Mikayl Majid of Defence Raya with a three days aggregate score of 226. His success can be attributed to talent, untiring hours on the practice range and good coaching by his father. His rival was Damil Ataullah who had to content with the runner-up slot. The victorious one in the under-21 group was Nouman Ilyas of Lahore Garrison. His aggregate score for the three days was 229, three strokes better than his nearest competitor Usama Nadeem of IBEX Sargodha. The triumphant one in the under-16 girls category was Hamna Amjad, her scores being 82, 77 and 77 and aggregate summing upto 236. The runner-up was Abiha Syed with an aggregate score of 246. And Parkah Ijaz of Defence Raya won selection in the under-21 category, her scores being 77, 67 and 82, the total adding upto 226. Her sister Rimsha Ijaz (Defence Raya) was the runner-up. At the conclusion of the trials, gold medals were awarded to the selected ones. The runners-up were given silver medals.