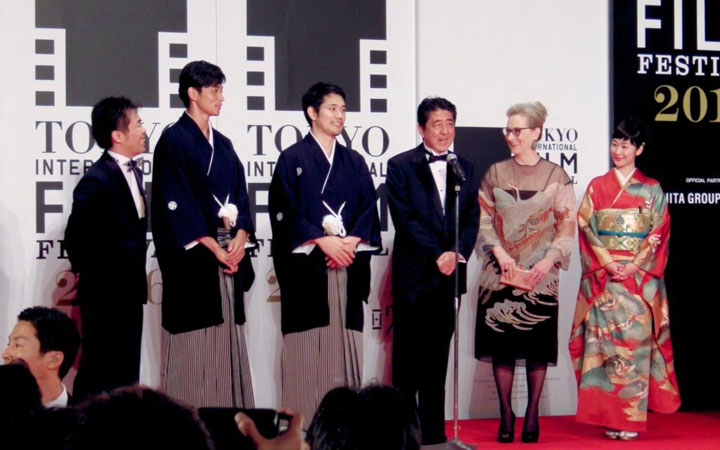 Most movie festivals, beginning with the inaugural Red Sea International Film Festival at Jeddah, had to be cancelled this year, given the havoc caused by the coronavirus pandemic. However, with some marginal letup in the rate of infections in Italy and Japan, both Venice and Tokyo held their annual events, the latter with a mix of physical and digital forms. Japan just did not want to mar its almost virus free-environment in October-November by inviting foreign guests. So, it offered digital rights probably to keep the continuity flowing.

After watching many films, one found some worked better for this writer than others. The only entry from India, Mangesh Joshi’s Ashes on a Road Trip reminded me of the 1998 Cannes title, Patrice Chereau’s Those Who Love Me Can Take The Train — a classic example of how people blurt out uncomfortable truths or fume at injustices they have been nursing. Chereau’s work takes us to the funereal of a minor painter, and his relatives gather at his twin brother’s home, where long buried secrets are openly tossed around. Similarly, Joshi’s work is a subtle but powerful look at how human relationships begin to break after a death.

Puru Dada is gone, and his three younger brothers, Satish Karkhanis (Mohan Agashe), Pradeep Karkhanis and Ajit Karkhanis (Ajit Abhyankar), begin the rituals of cremation. Puru, on his death bed, had expressed his wish to have his ashes buried in their ancestral home and fields. So, the three men set out in a van driven by Dada’s son Om Karkhanis (Amey Wagh). They are accompanied by their sister, Sadhana Karkhanis (Geetanjali Kulkarni).

The movie turns into an adventure-filled road trip, sweetly poignant at times and punishingly painful at other. There are moments of hilarity as there are of deep sorrow at a memorial meet, where Dada’s kind gestures are praised by those who received his noble help.

Much like most Iranian movies, Reza Dormishian’s No Choice uses minimalism to tell us a socially relevant story that is as distressing as it is elevating. The work gripped me with its powerful imagery, no-nonsense script and brilliant performances. With mostly female cast, the film could have been a little less than 108 minutes. But never mind, it presents a socio-legal thriller without exaggerated frills and mannerisms, and what a contrast this is to the kind of courtroom dramas or social narratives we have seen in Indian movies .An auteur with the most original of ideas, Dormishian tackles hugely disturbing happenings in Iran – the miserable condition of the homeless, who do not have an inkling of even what their basis rights are, the illegal trade in surrogacy and the misdeeds in the medical fraternity that go under the guise of community welfare.

Golbahar is a pretty teenager who lives on the streets of Tehran and is recklessly used as a baby-producing machine by a pimp, Mojtaba ( Mojtaba Pirzadeh). When she meets with an accident, has a miscarriage and has her fallopian tubes tied up during the procedure at the hospital without her consent, all hell breaks loose. This discovery is made when she and Mojtaba find out that she does not conceive after having sex with a rich man, whose wife cannot give him children. Social-activist lawyer, Sara Nedayi is tough behind her pleasing face, and brooks no nonsense. She defends Golbahar, taking on the powerful medical system and respected gynaecologist, Dr Pandar (Fatemeh Motamed-Arya), who is accused of harming the teenager.

Japanese master Koji Fukada’s offering The Real Thing is, well, a romance about a salaryman (as employees are referred to in Japan)! Scratch the surface, the film talks about in an endless back and forth form about the hero, Tsuji and his Teen Deviyan. (Remember the Hindi film with Bollywood casanova Dev Anand hitting it out with Nanda, Simi Garewal and Kalpana Mohan?).

First produced by Japan’s Nagoya TV as a 10-episode series from a comic book and helmed by Fukada, The Real Thing has been condensed to nearly four hours for a theatrical opening. And in these 233 minutes, Tsuji flits from one woman to another – and then back to the first and the second in what appears like an endless game of musical chairs.

There was something about first-time feature film director, David Bonneville’s (renowned for his shorts), The Last Bath that reminded me of the celebrated 1960s musical, The Sound of Music. Like Maria in this work, Josefina in The Last Bath, is all set to take her celibacy vows in order to become a nun in a convent near Porto (the second largest city in Portugal), when a tragedy pushes her away from this path. While in The Sound of Music, Maria is sent to take care of the widowed Captain Von Trapp’s seven children, Josefina has to rush to care for her nephew when her father passes away. The 15-year-old boy, Alexandre has been, in the absence of his mother, staying with his grandfather. Also, like Maria, who struggles to reconcile with Christ’s calling in the face of her growing attraction to the captain (there is a beautiful scene here in which Mother Superior asks Maria whether she would love God less if she were to love Von Trapp), Josefina also faces an inner turmoil in her relationship with her young nephew.

The Last Bath is disturbingly complex, intense and even dark as we see a family on the verge of dysfunction. At her father’s funeral, Alexandre weeps inconsolably and holds on to the hope that his mother, Angela (played by Moreira’s real-life twin Margarida Moreira), would come back to fetch him.