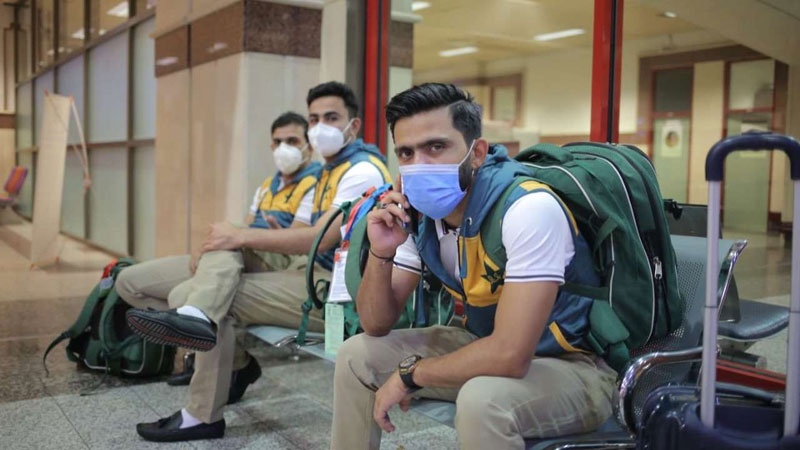 LAHORE: One more member of the Pakistan cricket team has tested positive for the novel coronavirus, New Zealand’s Ministry of Health said on Saturday, taking the tally of infections within the touring party to seven. The identity of the squad member is not yet clear. Six players –––- Sarfaraz Ahmed, Rohail Nazir, Naseem Shah, Mohammad Abbas, Abid Ali and Danish Aziz ––- had returned positive results from the first tests conducted upon Pakistan’s arrival in New Zealand on November 24. The latest positive result comes from the second batch of tests conducted on day three of the team’s quarantine at a managed isolation facility in Christchurch. All other tests conducted on day three have returned negative results. This doesn’t include the six players who had already tested positive and assistant coach Shahid Aslam, who will join the squad in Christchurch after completing his 14-day quarantine in Auckland.

“One additional member of the Pakistan squad has today tested positive during routine testing. The remainder of the results from the squad’s Day 3 swab testing — apart from the six who have already returned a positive result, are negative,” the ministry said. The team had initially been given an exemption to train together in managed isolation but that had been temporarily revoked and will remain on hold pending consideration by health officials, which is expected to take until next week, the ministry added. Pakistan are due to play three Twenty20 internationals and two Tests from December 18, while a Pakistan ‘A’ tour will also be held concurrently.

The fact that the second round of testing only threw up one new positive case will come as a relief for the Pakistan Cricket Board, which had been awaiting the results with some anxiety, particularly after the revelations that some members of the touring contingent had breached Covid-19 protocols at their managed isolation facility. The PCB had, in fact, organised a media interaction with CEO Wasim Khan on Saturday morning, but cancelled it once it came to know there was only one additional positive case. Wasim had earlier addressed the players and urged them to comply with Covid-19 protocols, saying it would be “hugely embarrassing” if they were sent home as a result of another breach.

The squad will have to clear two more tests, on days six and 12 of their isolation, before being allowed to leave quarantine. Pakistan had sought an exemption to be allowed to train while in managed isolation, but that exemption is on hold pending investigation by medical authorities on its safety and feasibility. In the meanwhile, those who have tested negative are allowed to go out on their balconies or make short, individual visits to a park near the isolation facility. Pakistan are due to play three T20Is on December 18, 20 and 22 in Auckland, Hamilton and Napier respectively, before playing two Tests in Mount Maunganui (December 26-30) and Christchurch (January 3-7). A day earlier, Pakistan Cricket Board (PCB) Chairman Ehsan Mani said he respected the concerns raised by the New Zealand government, but hoped no major danger loomed over the tour.