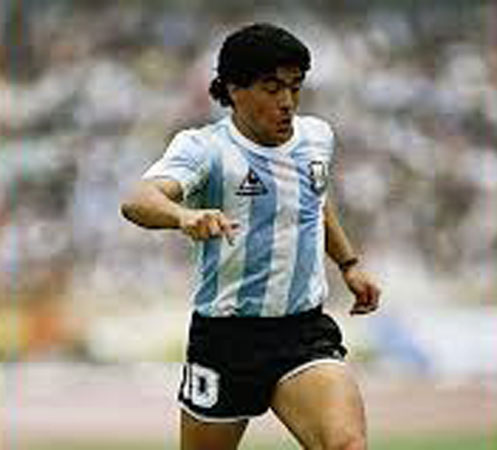 KARACHI: The Pakistan Football Federation (PFF) has announced that it will honour legend Diego Maradona during the PFF Challenge Cup which starts next week in Lahore. An official of the PFF confirmed that the federation has taken a decision to honor Maradona, along with former National Team player Wali Mohammad, during the Challenge Cup game. The PFF announcement came after the FIFA said it has requested all its members association to observe a minute of silence to honor Maradona who passed away recently. “We will follow FIFA request but it was already decided on Friday to honor Maradona and an ex- Pakistan National Team player Wali Mohammad who passed away recently, as a sign of respect and mourn during the first fixtures of every team in the upcoming National Challenge Cup,” said PFF Director Technical Daniel Limones.
“Maradona is and was the reason that many fell in love with football and this will be, in a tiny way, our way to honor the legend,” he said. Earlier on Friday, the FIFA – in a statement announced that world of football will honor Diego Maradona during various competitions this weekend. “As the world of football mourns the passing of Diego Armando Maradona, FIFA has today requested its 211 member associations to call upon all competition organizers to hold a minute of silence at every football match this coming weekend, or at the next possible occasion, to honor one of the greatest football icons of all time,” the FIFA had said. The legendary footballer from Argentina, Diego Maradona, had passed away on November 25th at his home Buenos Aires due to cardiac arrest.