Govt, opp at odds over PDM’s November 30 rally in Multan 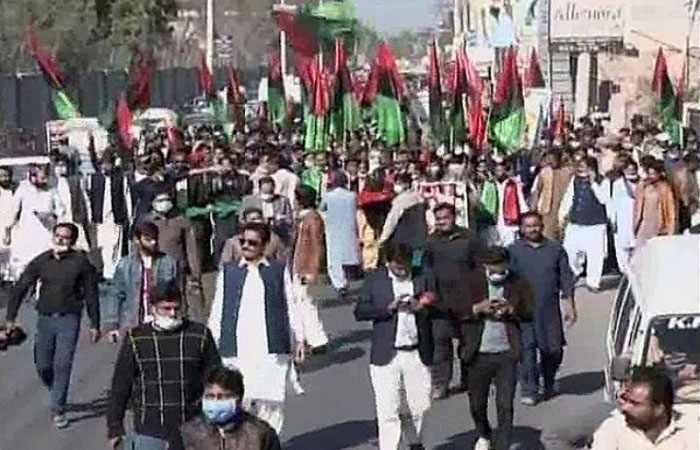 Police in Multan filed a case against PPP workers after they broke through security barriers and stormed into Multan’s Qila Qasim Bagh on Saturday, ahead of a Pakistan Democratic Movement (PDM) rally scheduled to take place there on Monday, a private TV channel reported.

The PPP group to charge at the venue was led by sons of former prime minister Yousuf Raza Gilani, Ali Haider Gilani and Musa Gilani. The party’s workers were able to storm into the stadium despite the heavy police contingent deployed there, following which clashes occurred between the workers and law enforcement agencies. According to the PPP Media Cell, their workers have taken control of the administration of the stadium and have also set up a welcoming camp outside. On the other hand, PML-N workers led a rally in Multan and also entered the stadium after it was broken into. “The rally will be held in Qila Qasim Bagh (at every cost). Today all the barriers of the police and administration have been broken down. After storming the gates, we have taken control of the stadium,” PPP leader Musa Gilani said.

Police registered a case against against 70 named and more than 300 unnamed party workers for breaking off locks and forcing their way into the stadium. The case was registered at Multan’s Lohari gate police station.

Additionally, a case was filed against caterers who had agreed to provide services to the organisers of the November 30 rally and seized some of their equipment.

PPP Chairman Bilawal Bhutto-Zardari warned the government to desist from carrying out a crackdown against PPP workers in Multan and other parts of Punjab “otherwise there will be protests in every nook and corner of the country”, according to a statement by the party. He said that there are reports that the PTI government is initiating a crackdown against party workers to “create hurdles” in the holding of PPP Foundation Day and PDM rally in Multan. “Misuse of the state machinery against democratic workers will add fuel to the fire and every responsibility of the situation thereafter would lay on the PTI regime,” read the statement.

Meanwhile, Special Assistant to Chief Minister Punjab on Information Dr Firdous Ashiq Awan said that the Buzdar government is “exercising restraint”. Awan said that the government is holding back but PDM wants the situation to take “a different turn”. “Action will definitely be taken against those elements who tried to take the law into their own hands in Multan,” vowed Awan. The government and the opposition are at odds with each other over the PDM jalsa at Qila Qasim Bagh on November 30. Prime Minister Imran Khan has asked the opposition parties to call off their rallies as the coronavirus situation in the country is worsening day by day. However, the opposition alliance has categorically rejected the government’s demands and vowed to hold rallies all over Multan if it is stopped from holding the Qila Qasim Bagh gathering.

The Islamabad High Court, in its decision on November 19, had placed a ban on all outdoor gatherings of more than 300 persons. The NCOC also made a decision that no indoor event would be allowed and only outdoor events with a maximum of 300 guests would be allowed.