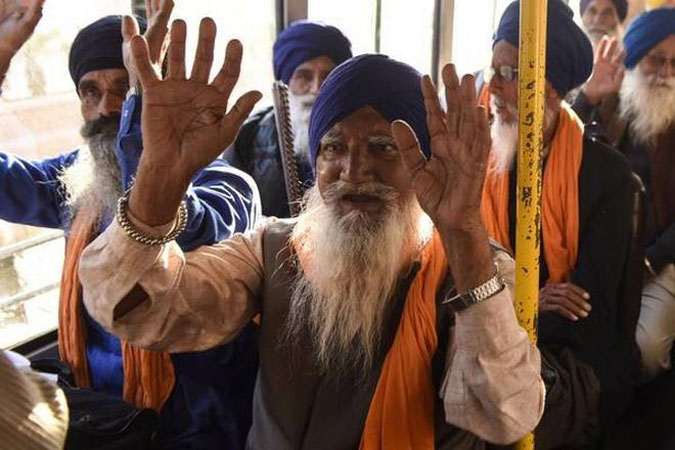 The three-day celebrations of the birth anniversary of Baba Guru Nanak started Saturday in Nankana Sahib as over 600 Sikh pilgrims have already arrived from India through the Wagah border.

The main ceremony of the celebration of the 551st birth anniversary of Guru Nanak Dev will be held on November 30 at Gurdwara Janamasthan in Nankana Sahib. The celebrations will end after the Nagar Kirtan procession on Monday, followed by the Bhog ritual at night. Various departments including Rescue 1122, Health Department, Civil Defense, ETPB and police have already completed necessary arrangements in this regard, including for security, accommodation, food, healthcare and transport of the Sikh pilgrims. Hundreds of policemen and security personnel have been deployed to avoid any untoward incident.

During their stay, the pilgrims will also visit other gurdwaras in the province.

The representatives of Punjab Health Department checked all passengers for Covid-19 negative test reports and any signs of the infection. After immigration and customs formalities, the delegates left for Gurdwara Janamasthan in Nankana Sahib by buses. The pilgrims also brought a Palki for Guru Garanth Sahib from India, which they will place in the Gurdwara.

Every year, more than 2,000 Sikhs come to Pakistan to take part in the birth anniversary celebrations of Guru Nanak Dev. However, the number is reduced this year due to the ongoing Covid-19 pandemic.

Meanwhile, Sardar Janam Singh, Head Granthi of Gurdwara Janamasthan, has demanded that the United Nations take notice of Kartarpur Corridor closure by India. He said Pakistan opened the corridor on the 550th birth anniversary of Baba Guru Nanak as a gift to the Sikh community while India has closed it. He said the United Nations must ensure implementation of the agreement reached on the corridor.

It may be mentioned here that in order to promote religious harmony in Pakistan and across the world, the Ministry of Information and Broadcasting has released a new song. According to Radio Pakistan, the song has been picturized in the context of the opening of Kartarpur Corridor and giving visa-free access to the Sikh community to visit Gurdwara Darbar Sahib, Kartarpur, in Narowal district of Punjab.

In the song, Bollywood celebrity Ponam Kaur and her family are seen expressing their gratitude to Prime Minister Imran Khan for taking the unprecedented initiative for facilitating them in their religious journey and on making their long unfulfilled dreams come true. The move comes in the backdrop of Imran Khan’s vision of achieving prosperity for the entire region through peace and opening of hearts for the communities belonging to other faiths. His vision has already started bearing fruits in the form of enhanced interfaith harmony and religious tourism.

PM Imran Khan inaugurated the visa-free border crossing on November 9, 2019, on the eve of the 550th birth anniversary of Baba Guru Nanak, the founder of the Sikh faith. This initiative by the government has been appreciated by the Sikh community across the globe. Under the religious tourism agreement between Pakistan and India, 3,000 Sikh pilgrims from India can come on Baba Guru Nanak’s birthday.