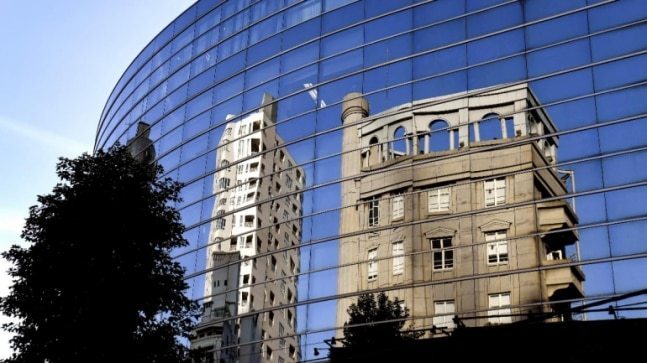 Windows are an essential part of any building’s design but they are also the least energy efficient part of the structure. In a new research, scientists in Singapore have developed a ‘smart’ liquid window panel that they say can help cut power bills sharply by reducing demand for air-conditioning.

If things go as per plans, soon your offices and homes may be fitted with specially designed liquid window panels that will not only help reduce your electricity requirements but also be ‘smart’ enough to regulate indoor temperatures based on the conditions outside, without requiring any device.

Scientists at the Nanyang Technological University, one of Singapore’s leading engineering research institutes, have developed a unique liquid window panel that can block sunlight to regulate solar transmission into a room.

Besides this, the panel can simultaneously trap thermal heat received from sunlight and gradually release it later on and help regulate indoor temperature.

The researchers say these features can help in significantly cutting down upon electricity requirements in buildings, especially in large office complexes. Apart from energy efficiency, this liquid window panel also provides a soundproof environment.

The findings of this research, published recently in the scientific journal Joule, gain importance in the context of post-pandemic development strategies that countries will have to formulate to meet their infrastructure requirements.

Countries today face the challenge of reviving the construction sector to strengthen public infrastructure. At the same time, they also have to keep in mind their global commitments to reduce carbon footprints. Experts opine that adopting energy-efficient technologies to construct and utilise buildings is one of best ways forward to achieve this twin goal.

Windows are an essential part of any building because they provide much-needed ventilation and daytime lighting. However, while windows serve these needs, they also become a burden by allowing significant thermal transmission into a building.

In summer, a large amount of the sunlight directed at windows gets converted into heat and enters buildings, thus increasing the demand for air-conditioning. Whereas in winter, when the outside temperature is cold, windows allow the much-needed indoor heat to escape, which in turn increases the need for artificial heating. It is estimated that windows are responsible for up to 30 per cent energy loss during winter.

In their study, the researchers at Nanyang Technological University argue that despite being a key component of any building’s design, windows are its least energy-efficient part.

“Due to the ease with which heat can transfer through glass, windows have a significant impact on heating and cooling costs of a building.”

To construct energy-efficient buildings, it is thus important that windows also contribute in reducing electricity use.

So far, much of the focus on windows has been on their design, alignment and potential for shading. However, since glass is becoming the predominant material used for windows and outer building envelop, it becomes important that it too is energy efficient.

In terms of energy efficiency, an ideal scenario would be one where windows not only allow ventilation and sufficient daytime lighting, but also regulate thermal transmission so that the need for artificial cooling/heating (that forms a bulk of electricity use in buildings) gets minimised.

In their research, the experts in Singapore tried to factor in these two aspects while developing their liquid window panel.

The window is designed in a manner that allows it to simultaneously block sunlight while also trapping thermal heat. The blocking allows the window to regulate solar transmission into a building while the trapped heat can be released later on to regulate indoor temperature, thus helping to reduce energy consumption in buildings.

The study has found that in comparison to traditional glass windows, the ‘smart’ liquid window can reduce up to 45 per cent of energy spent on heating, ventilation and air-conditioning in buildings.

Not only does it reduce electricity consumption, this ‘smart window’ is also estimated to be 30 per cent more energy efficient in comparison to commercially available glass, and is also cheaper to make.

This is not the first time that an effort has been made to develop energy-efficient windows. The researchers of the present study say conventional energy-saving windows are made using expensive coatings. These are able to prevent infrared light from passing into or out of a building, which in turn helps to reduce demand for heating and cooling.

However, these windows are unable to regulate visible light, which is a major component of sunlight that causes buildings to heat up.

The idea behind the liquid window panel was to overcome this limitation.

For this, the team decided to use water as a medium because of its ability to absorb a high amount of heat before itself getting hot. In technical terminology, this property is called ‘high specific heat capacity’.

For their ‘smart window’, the Singapore scientists created a mixture of micro-hydrogel, water and a stabiliser. This mixture was then poured between two layers of transparent glass.

Through experiments and simulations, the scientists found that this mixture can effectively reduce energy consumption in a variety of climates, thanks to its ability to respond to a change in temperature.

The mixture becomes opaque when it is exposed to heat (thus blocking sunlight from entering a building), and when it cools, it returns to its original clear transparent state.

As a result, when used during summer, this window panel allows sunlight to pass through it in the cool morning and evening hours, but starts blocking it by turning opaque as the temperature rises during the afternoon.

And while this process is at work, due to the high heat capacity of water, a large amount of thermal energy gets stored in the mixture between the glass panels, instead of it getting transmitted into the building during the hot hours. This heat then gradually cools down and gets released at night.

Controls entry of sunlight into a building by turning opaque as temperature rises, and Acts as sponge to trap thermal energy from sunlight and release it slowly later on to regulate temperature. In winter, the mixture acts like an insulation between the inside and outside environment and helps in preventing heat loss. Because of these features, the researchers believe that their liquid window is best suited for use in office buildings, where operating hours are mostly in the day.

To verify their concept, the scientists conducted outdoor tests in Singapore and Guangzhou (for hot environments) and Beijing (for cold environments). The test in Singapore revealed that during the hottest time of the day, the smart liquid window had a lower temperature (50°C) as compared to a normal glass window (84°C).

In Beijing, tests showed that the room using the smart liquid window consumed 11 per cent less energy to maintain the same temperature compared to the room with a normal glass window. This indicates better insulating efficiency that prevents heat loss in cold environment.

Since the window uses a liquid medium between the two glass layers, the researchers feel it will give the industry room to make window panels in any shape or size.

“Our innovation combines the unique properties of both types of materials — hydrogel and water. By using a hydrogel-based liquid, we simplify the fabrication process to pouring the mixture between two glass panels. This gives the window a unique advantage of high uniformity, which means the window can be created in any shape and size,” said Dr Long Yi, lead author of the study and Senior Lecturer at the School of Materials Science and Engineering, Singapore.

To be confident of their research, the team also created simulations using an actual building model and weather data of four cities — Shanghai, Las Vegas, Riyadh, and Singapore.

As per the study, these experiments showed that the smart liquid window had the best energy-saving performance in all four cities when compared to regular glass windows and low emissivity windows.

Apart from these, while experimenting with the liquid window panel, the team found that the window can also provide an effective soundproofing environment. “Soundproof tests suggested that the smart liquid window reduces noise 15 per cent more effectively than double-glazed windows,” the study said.

Explaining this, Wang Shancheng, the first author of the study, said the sound-blocking double glazed windows use two glass layers, which are separated by an air gap that acts as an insulation. “Our window is designed similarly, but in place of air, we fill the gap with the hydrogel-based liquid, which increases the sound insulation between the glass panels, thereby offering additional benefit not commonly found in current energy-saving windows,” Wang Shancheng said.

Following the publication of their research in Joule, the scientists are now looking to collaborate with industry partners to commercialise the smart window, the Nanyang Technological University said in a statement. Globally, it is estimated that buildings account for nearly 40 per cent of process-related CO2 emissions and consume about 36 per cent electricity. With large parts of the world set to undergo rapid urbanisation over the next 20-30 years, more and more buildings will be constructed. According to the Niti Aayog, 40 per cent of the buildings that will be in place in India in the next 20 years, are yet to be constructed.

The United Nations (UN) estimates that the share of global population living in urban centres would increase from 55 per cent in 2018 to 68 per cent by 2050. In other words, every two out of three people would be living in a city or town by 2050.

Data released by the International Energy Agency (IEA) show that overall energy-related CO2 emissions arising from buildings have seen a rise in recent years even though they had briefly flattened between 2013 and 2016. “Direct and indirect emissions from electricity and commercial heat used in buildings rose to 10 Gt CO2 in 2019, the highest level ever recorded,” IEA said in a recent report on buildings and energy efficiency. The report said this rise is due to convergence of multiple factors that include an increasing energy demand to meet thermal comfort because more and more people are purchasing air-conditioners the world over. Since glass is now a vital and widely used construction material for windows and outer building envelop, it is time that experts and the industry brainstorm and develop energy efficient materials that serve the triple purpose of ensuring ventilation, lighting and thermal comfort.