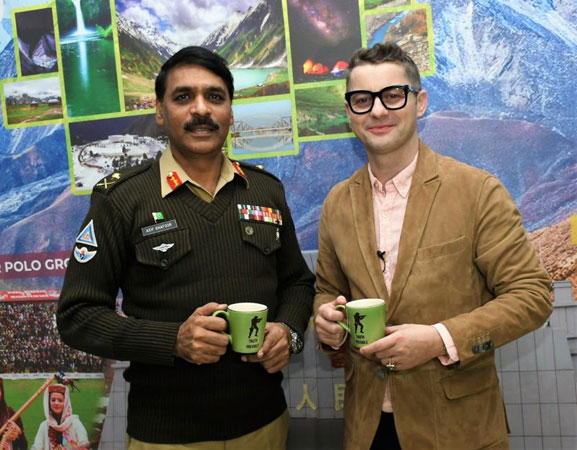 It seems like Akcent member Adrian Sina hasn’t yet gotten over his ‘fantastic cup of tea’ banter with former DG-ISPR Asif Ghafoor!

After Ghafoor was elevated to the rank of Lieutenant General on Wednesday, Sina took to Twitter to extend congratulations to him.

He also couldn’t help but crack a viral joke at the expense of Indian fighter pilot Abhinandan Varthaman along with it.

“Congratulations to you my friend for being promoted to the rank of Lieutenant General,” he wrote, before adding, “I can’t wait to have the fantastic cup of tea again,” referencing his Nov. 2019 meeting with Ghafoor who was then the head of Inter-Services Public Relation (ISPR).

As the story goes, Sina had tweeted in Oct. 2019 that he would love to meet Ghafoor to which the then DG ISPR had responded, “A fantastic cup of tea is scheduled in my office,” taking a dig at the Feb. 2019 incident involving Varthaman during a particularly hostile spell between the two countries earlier in the year.

After Varthaman’s plane was shot down and he was rescued by the Pakistan army, ISPR had released a video of him conversing with military officials. He was asked a number of questions before an officer inquired “I hope you like the tea?” to which Abhinandan replied, “The tea is fantastic, thank you.”

The ‘fantastic tea’ joke subsequently became a viral joke on this side of the border.

Talk about a long-running joke!