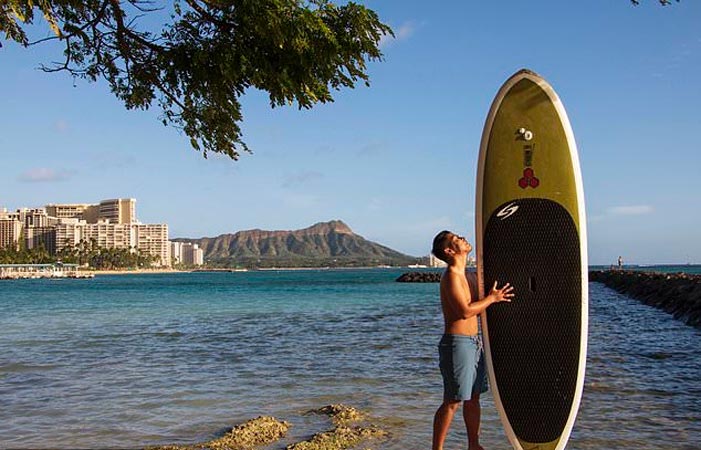 Line-Noue Memea Kruse lives on Oahu’s famed North Shore, where marveling at sea turtles, epic waves and sunsets that paint the sky orange and purple are a must for many tourists in Hawaii.

After the islands required a two-week quarantine for travelers amid the coronavirus pandemic, Kruse rejoiced in the little things as the number of tourists dramatically dropped. It took her 35 minutes to drive to Walmart, instead of spending hours stuck in traffic as tourists gawked at turtles on the beach. But tourist-reliant Hawaii has now eased the restrictions imposed in March, allowing visitors to produce a negative COVID-19 test to avoid the quarantine.

“I can literally tell you the day that they opened up,” Kruse said. She was driving to Walmart on Oct. 15, when the travel restrictions eased, and “I waited for hours again.”

For seven months, locals had taken back spots normally crowded with visitors. They could enjoy Waikiki’s famous beaches without the sunburned tourists and walk on sidewalks without hordes of visitors awestruck by clear blue water, white sand and the other trappings of a tropical getaway.

Locals, many of whom depend on tourism jobs, have long felt ambivalence about living in an island paradise that relies heavily on visitor spending, but many saw an upshot to a health crisis that threatened their livelihoods – reclaiming favorite areas long overrun by crowds.

Before the pandemic, as many as 30,000 visitors arrived a day. That dropped to several thousand after the quarantine mandate.

“What the pandemic did was give us all a moment to pause, a number of months, to rethink everything,” said state Sen. J. Kalani English. “What it proves for us is that old model of tourism, which is, you know, mass bring 11 million visitors a year, didn´t work and people were tired of it.”

Some residents are worried as cases surge in other parts of the U.S., but Hawaii officials say an “extremely small number” who get tested before traveling are diagnosed after they arrive. On Monday, 10,515 passengers arrived, with nearly 5,300 indicating they were coming for vacation, the Hawaii Tourism Authority said.

For English, who represents rural parts of Maui, fewer tourists allowed him to reconnect to Hamoa Beach, his “playground” as a child near where his family has lived for generations.

“I haven´t been down there for a number of years because, frankly, it was just too crowded,” he said. During the pandemic, “I started going there again like I did when I was very young, to go swim in the morning.”

“How I see it is there was some silver lining in this pandemic that over the last few months, locals and especially kanaka were able to reclaim some of the spaces … we are not able to occupy or even use because of tourism,” he said, using a word for Native Hawaiians. But as a communications organizer for a union of hotel workers, de Venecia has “messy” feelings: Many members lost paychecks and medical benefits because of a lack of tourists.

Only 300 out of some 9,000 out-of-work members returned to their jobs when Hawaii welcomed back travelers, de Venecia said, making him wonder if tourism will be the lifeblood it once was.

One union member recently went back to work with hesitation. Aina Iglesias, a guest service agent at a Waikiki hotel, said she’s grateful for an income again. “But it felt really nice for a while to be tourist-free,” she said of the days spent on less-crowded Waikiki beaches with her family. “When tourists are here, it’s packed, there’s traffic.”

Iglesias said she’s nervous about staying safe at work, pointing to guests who have ignored health orders. “Those who are in quarantine, they go out and they don’t care,” Iglesias said. “And they get mad at us.”

Even with the option to produce a negative test, some travelers choose to quarantine for two weeks, whether at hotels, rentals or at home. Hawaii authorities have arrested some people for violating quarantine. John Fielding, an Oahu resident of 35 years, said returning tourists will bring normalcy and economic stability. But he wants them to wear masks, keep their distance and follow other health orders.