From a free coffee to a virus test, Naples helps its own 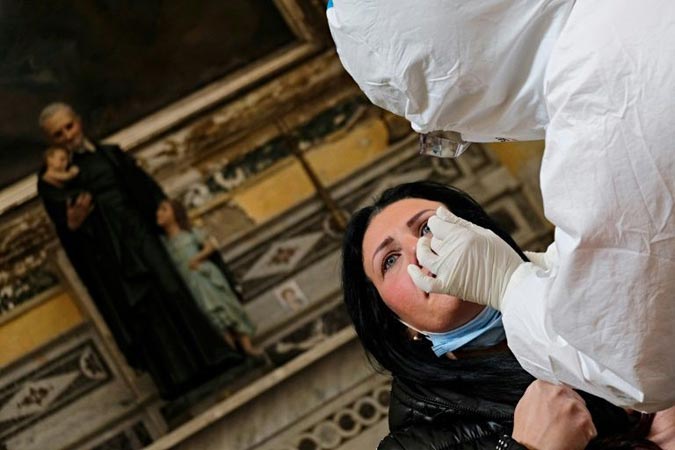 Naples is proud of its tradition of “caffe sospeso”, where a customer pays twice for a coffee so that someone less fortunate can have one for free.

Now this act of charity is being extended to coronavirus tests in the southern Italian city, where the health service is struggling to deal with a surge in new cases.

At San Severo Fuori Le Mura church, in one of the most densely packed areas of Naples, a local community organisation offers residents a chance to get a rapid swab test and anonymously donate another.

“It’s a high-risk area, because there are large family groups living in very small places, so the risk of contagion is very high,” said Angelo Melone, head of the non-profit group that runs the initiative.

Since they started two weeks ago, 1,000 people have been tested — 300 of them benefitting from the generosity of their fellow citizens.

“We Neapolitans have a big heart, in good and in bad times we share everything,” said local resident Giuseppina Puglise, after paying for an extra swab.

The pre-booked tests cost 18 euros ($21) each and are carried out by a team of three doctors and two nurses within the airy confines of the 16th-century church.

The money pays for the swabs themselves and the nurses, with the others volunteering for free.

Rapid tests are readily available across Italy, the first European country to be hit by the coronavirus, where it has now recorded more than 50,000 deaths.

But they can be expensive. Such a test in a private clinic in Naples can cost between 30 and 45 euros, while a more accurate PCR test can cost 70 euros.

Antonio Campagna, a 33-year-old taxi driver with three children, has struggled in the economic crisis provoked by Italy’s national lockdown earlier this year.

“I heard that there was the possibility of a free test,” he told AFP.

“I would like to take advantage of this initiative, which I consider an act full of altruism.”

Italy’s economy has been battered by the pandemic, and the poorer southern regions are suffering particularly badly.

Unemployment in Naples last year was already double the national average, at 23.3 percent compared to 10 percent, according to national statistics agency Istat.

Locals here feel a sense of solidarity as they face up to the inevitable tough times ahead. After paying for an extra test, Luigi Parisi, a 32-year-old from Naples, said that helping others less fortunate was now “a civil and moral duty”.