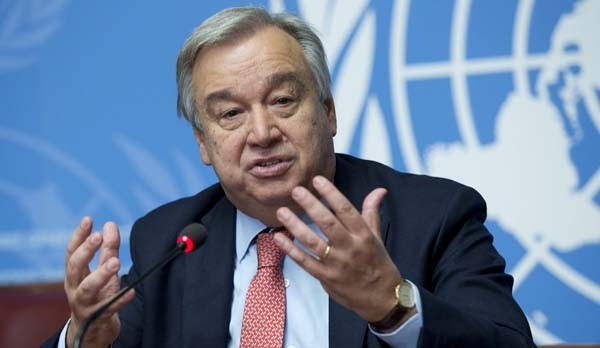 Pakistan’s Ambassador to United Nations Munir Akram on Tuesday handed over to UN Secretary General Antonio Guterres a dossier on India’s campaign to promote terrorism and subversion in Pakistan, and urged him to prevail on New Delhi to ‘desist from these illegal and aggressive activities’.

Ambassador Akram said he told the UN chief to take note of the fact that India was violating international law, the UN Charter and Security Council resolutions by stoking terrorism. “We have urged the Secretary-General to play his role in persuading India to halt its terror and subversive campaign against Pakistan,” he said at a press conference at the Pakistani mission. Pakistan, he said, will draw the attention of the relevant UN bodies, including the Security Council, to India’s sponsorship of terrorism, while reserving its right to self-defence.

Replying to a question, Ambassador Akram said that the secretary-general praised Pakistan’s fight against terrorism, pointing out that, as the UN High Commissioner for Refugees, he had witnessed the operations Pakistani forces had conducted in eliminating terrorists. The UN chief, he said, also appreciated the sacrifices Pakistan had made in combating terrorism.

The Pakistani envoy said the secretary-general said he would study the dossier and take appropriate action. He told reporters that the dossier has been prepared after full investigation of India’s ‘systematic campaign’ to promote terrorism and subversion in Pakistan. Pakistan, he said, was responsible for the decimation of Al-Qaeda and its affiliates through effective military operations since 2014. In conducting the most successful counter-terror operations anywhere in the world, Pakistan paid a heavy price: 83,000 civilians and soldiers killed, and in the process also suffering a massive setback to economic and social development to the tune of $126 billion.

The situation in Pakistan had returned to normal, he said, but over the past months cross-border terrorist attacks in Pakistan from the ungoverned spaces across the country’s western border have escalated. “We knew of India’s hand in such attacks,” Ambassador Akram said. “We now have gathered irrefutable evidence that India is engaged in a systematic campaign to destabilize Pakistan through terrorist attacks, promotion of secession and subversion in a what is called Hybrid/5th generation war against Pakistan.”

Ambassador Akram said the dossier contains evidence of Indian subversive actions in Azad Jammu and Kashmir, Gilgit Baltistan and in Karachi. India, he said, was also seeking to utilize Security Council mechanisms to defame Pakistan by portraying itself as a victim of terrorism. “It is abusing the Financial Action Task Force (FATF) to damage Pakistan’s economy.” In addition, the Pakistani envoy said India’s hybrid war was accompanied by threats of aggression against Pakistan, and daily violations of the ceasefire along the Line of Controls (LoC) in disputed Jammu and Kashmir. “India’s terrorist and subversion campaign is being directed at the highest levels of the Indian leadership,” he told journalists. “Pakistan has called on the Secretary General and the international community to take note of Indian terrorism and subversion against Pakistan and to prevail on India to desist from these illegal and aggressive activities.”

Replying to a question about an anti-Pakistan dossier given by India to some members of the UN Security Council, the Pakistan envoy said that document did not have much credence. India, he said, has been trying to falsely project itself as the ‘victim’ of terrorism, whereas it in fact is the “villain and the perpetrator of terrorism in our region.”