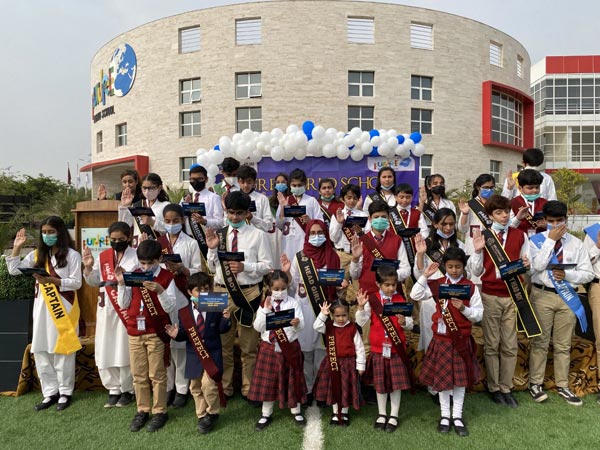 The student council comprising of AS & A Level and IGCSE’s vowed under oath that they will be active and responsible members of the student executive council and will abide by the laws made by the college and the managing body to guarantee themselves and the student body a better campus life.

Senator Sana Jamali was the chief guest who inducted the School’s Head Boy Muhammad Cheema and Head Girl Hannah Rabbani as well as the Executive Council Members of all clubs and societies established within the school system. After administering the oath, Senator Sana Jamali along with the Principal of FWS Gulberg Greens, Islamabad Ms. Mehwash Ibrar awarded sashes, badges and certificates to the members of the council which were received with immense pride and diligence.

Principal Madam Mehwash Ibrar congratulated and advised the students to work with responsibility and honesty and to uphold these honorable positions with integrity. She described the college elections as a platform for the council to learn how to maintain discipline, interact with their peers and aid their fellow students. She also emphasized on leadership and determination of the youth to make a revolutionary change in Pakistan.

Senator Sana Jamali encouraged the students to work hard towards their respective clubs/societies and focus on the diligence of punctuality, discipline and planning activities that would be beneficial for the entire student body.

Principal Mehwash Ibrar appreciated the dedication of the hard-working staff of Future World School Gulberg Greens and commended the engagement of the students in a variety of clubs and societies such as Environment & WWF Society, Pakistan Red Crescent Society, 4H Club, United Nations Girl Up, Global Entrepreneurship Club, MIT LaunchX Club, Robotics & Auto Engineering and many more. She emphasized the importance of upholding these official positions and respecting the roles that they have promised. 64 Millennials were sworn in under the oath as part of the Student Council and promised to strive for the betterment of not only the college but the betterment of the society in general.