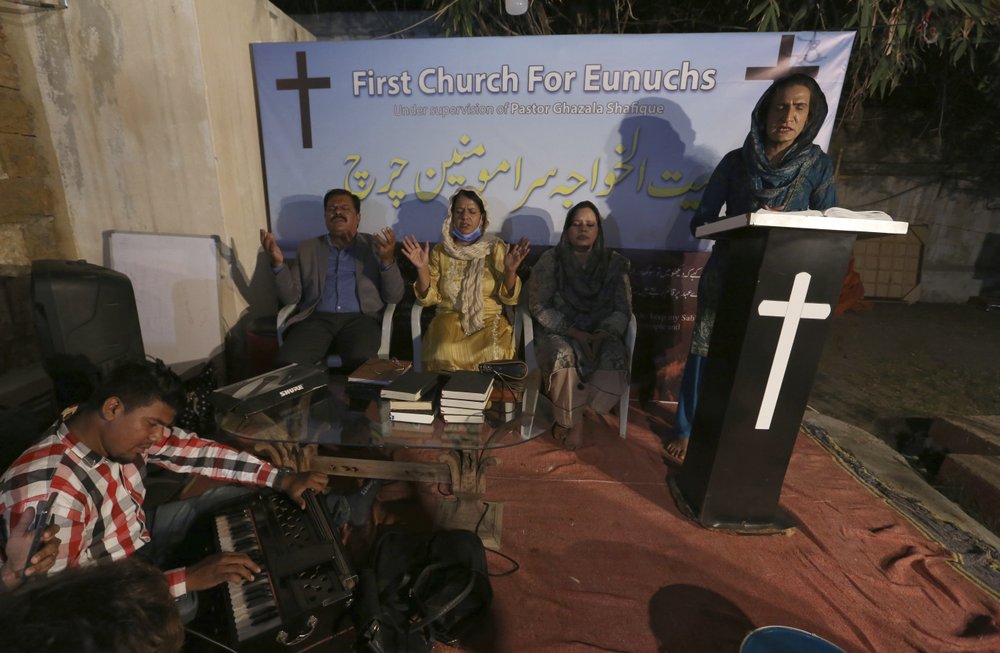 KARACHI: Pakistan’s Christian transgender people, often mocked, abused and bullied, say they have found peace and solace in a church of their own.

Shunned by other churches, they can raise their voices high here.

During a recent service, transgender women, flowing scarves lose over their long hair, conducted Bible readings and raucously sang hymns, accompanied by the rhythms of a drum played by a transgender elder in the church.

The church, called the First Church of Eunuchs, is the only one for transgender Christians in Pakistan. “Eunuch” is a term often used for transgender women in South Asia, though some consider it derogatory. The church’s pastor and co-founder Ghazala Shafique said she chose the name to make a point, citing at length verses from the Bible saying eunuchs are favored by God.

In Karachi, it sits in the shadow of a towering brownstone cathedral, where the congregation says they don’t feel welcome.

“People looked at us with eyes that are laughing at us,” said Nena Soutrey, a transgender woman whose life has been a tragedy of beatings, bullying and abuse.

“No one wants to sit near us and some even say we are an abomination. But we’re not. We are humans. We are people. What is wrong with us? This is who we are,” she said, a bright red scarf over her shoulders.

Transgender women and men of all faiths are often humiliated in deeply conservative Pakistan, though the government has recognised them officially as a third gender. Often disowned by their families, they resort to begging and work as wedding dancers.

“I found myself in such a confusing situation,” she said.

Arzoo said she loved to sing the hymns or recite the Bible, but in churches, she attended they asked her not to sing.

“I would try to come in front but the others, they considered it a dishonor if we participate,” she said. “I don’t understand why they feel like this. We are human too, born of our parents. The way God created them, God also created us.”

At their new church, the pastor Shafique celebrates the nearly three-hour service, but it’s the transgender congregation that takes the lead.

The church is set up in the courtyard outside Shafique’s home. Brightly colored carpets give warmth to the cement yard. Pale blue plastic chairs, many of them dirty and cracked, serve as pews. It’s located in the same sprawling compound as the cathedral, protected by high walls and a steel gate.

But there’s no mistaking that the humble church belongs to them: A giant six-foot billboard emblazoned with a large cross proudly announces in English, “The First Church for Eunuchs.” An Urdu translation underneath uses the term transgender Pakistanis more often use for themselves, “khwaja sira [transgenders].”

Shafique, a rare female pastor in Pakistan, was first approached about starting the church by an unexpected advocate, a Muslim — Neesha Rao, Pakistan’s only transgender lawyer. Rao tells with pride how she begged on the streets for 10 years to put herself through law school.

Rao said she was moved by her transgender Christian friends who were often afraid to announce their faith, fearing further abuse, but also couldn’t find solace among fellow Christians.

“I am a Muslim child and a Muslim transgender, but I had a pain in my heart for the Christian transgenders,” said Rao as she attended a Friday evening service. She attends every week, she said, standing behind the worshippers.

Shafique belongs to the Church of Pakistan, a united Protestant Church of Anglican, Methodist and Reform Churches. So far, her efforts with the hierarchy to get her church recognised have been rebuffed.

“Church elders have told me they are not clean, […] that they are not righteous,” she said. “We reject them […] and then they become so broken and then they get into all bad things. I say we are to be blamed, the church and the parents.”

Pakistan’s recognition of a third gender was a remarkable move for the conservative country. It was life-changing for many because it allowed them to acquire identity cards, needed for everything from getting a driver’s license to opening a bank account.

“This is a great step,” Shafique said. But she added it doesn’t change attitudes. Parents often refuse to give their transgender children their birth certificates needed to get an ID card or forbid them to use their family name.

For Soutrey, the church is a refuge from a lifetime of pain.

Tears welled up and her voice cracked as she told of how her mother died when she was just 12, and her brothers beat and insulted her. Finally, she fled to live on the streets and found acceptance within the transgender community. She has stopped going out at night because of harassment and abuse.

“First thing I want to say is no one should have to suffer as transgenders suffer,” said Soutrey, between her tears. “People treat us worse than dogs,” she said, even in mainstream churches she attended.

“This church is important for us because we are free and happy sitting here, worshipping the God who created us.”