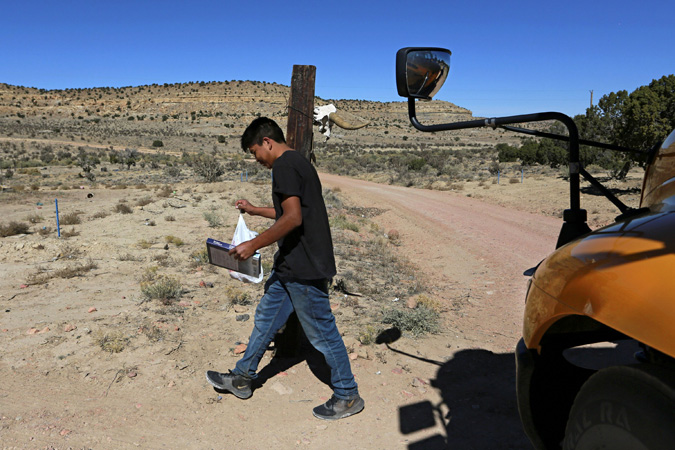 The midday arrival of a school bus at Cyliss Castillo’s home on the remote edge of a mesa breaks up the long days of boredom and isolation for the high school senior.

The driver hands over food in white plastic bags, collects Castillo’s school assignments and offers some welcome conversation before setting out for another home.

The closing of classrooms and the switch to remote learning because of the coronavirus have left Castillo and other students in this school district on the sparsely populated fringe of the Navajo Nation in New Mexico profoundly isolated – cut off from direct human contact and, in many cases, unconnected to the grid.

Like many of his neighbors, Castillo does not have electricity, let alone internet.

“There´s not a lot to do here. You clean up, pick up trash or build stuff. Like, I built that shed right there,” the 18-year-old Castillo said, pointing at a pitched-roof plywood shed.

“Hopefully, hopefully by next semester we´ll be going back into school,” he said. “I don´t like online. I like to be, you know, in school, learning. That’s just not me. I just find it a lot easier and a lot better than just out here, not doing nothing.”

The Cuba Independent School District, centered in a village of 800 people, has kept the buses running as a way to bring school to far-flung students who live on a vast checkboard of tribal, federal and county land.

On their routes, the buses carry school assignments, art supplies, meals and counselors who check in with students who are struggling with online bullying, abuse, thoughts of suicide or other problems.

The buses are a lifeline for families in the Cuba school district, of whom nearly half are Hispanic and half are Native American, including many Navajo-speaking English-language learners.

Many do not have running water. Castillo and others with no electricity charge their school-issued laptops with car batteries or at a relative’s house. One student has sent her laptop on the buses to be charged at school. This far out, internet service is unavailable or prohibitively expensive.

For students without home internet, the buses bring USB drives loaded with assignments and video lessons from teachers. Some students like Castillo eventually asked for paper packets because of the difficulty in charging laptops.

With COVID-19 cases spiking in New Mexico to their highest levels yet, it is unclear when the district will begin offering in-person classes again.

The district has a record of adapting to challenges, and a high school graduation rate of 83% – well above the state average – to show for it. It has long employed a “community school” approach in which social workers, nurses and teachers help students around the clock, not just during the school day, on the theory that they will do better academically if their home life can be made better. All students were issued Chromebooks in 2019, well before the coronavirus outbreak. That made the shift to distance learning easier in March when school buildings shut down.

Other rural districts around the country have likewise been engineering ways to connect with students who are otherwise disengaged during the pandemic. In San Joaquin, California, about 30 miles (48 kilometers) west of Fresno, the Golden Plains Unified School District found early in the pandemic that students were out working rather than doing schoolwork.

“We would have kids call from the fields. They were picking peaches,” said Andre Pecina, an assistant superintendent, who noted only 40% of high school students were participating in distance learning. “Once COVID happened, parents were like, `Let´s go to work.'” To bring students back into the fold, the district reached out to parents by phone to set teacher conferences early in the school year and ordered hundreds of internet hot spots. It is also delivering school materials and electronic devices to students.

In New Mexico, before the buses set out from Cuba High School each day, about 25 cafeteria workers, bus drivers and other staff spend over an hour loading them with milk, produce, prepared meals, toilet paper and other necessities for the families.

On board one day in late October was head district counselor Victoria Dominguez, who was checking on two students who had suicidal thoughts. She was bringing one a pair of skateboard shoes. In the spring, a screening system for messages sent by students flagged one or two a week as showing signs of possible emotional trouble. Now she is seeing dozens in single week.

As COVID-19 rates spiked, the school switched to making bus deliveries every other day, instead of every day.

The road from the high school turned from asphalt to gravel to deeply rutted dirt. The oak and pine trees gave way to sagebrush and gaunt junipers before the bus came to halt in front of a cluster of houses.