Sugar price has come down due to timely steps: Buzdar 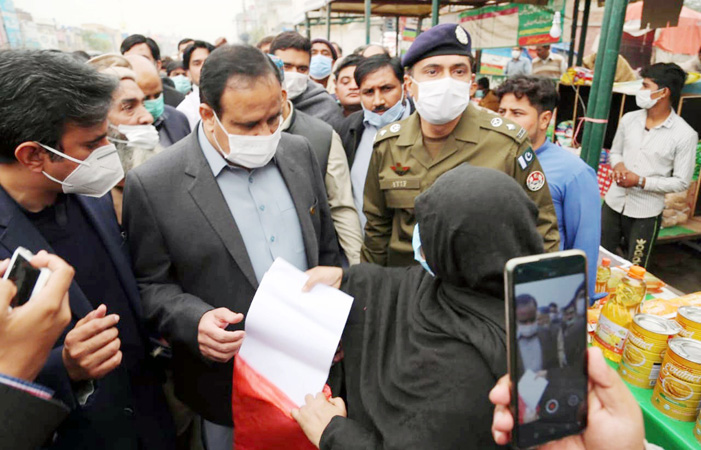 The CM paid a surprise visit to sahulat bazar in Sambrial and inquired about the rates of different items. He also talked with the visitors and assured a woman of solving her problem while issuing instructions to immediately solve the issue. Talking on the occasion, the CM said Punjab is the only province where flour is available at a fixed rate. Similarly, the sugar price has been decreased due to the timely steps of the Punjab government. The sugar is available at Rs 81 per kg and flour bags are also available at the notified rate in this bazaar, he added. I have come to Sambrial from Zafarwal to personally monitor the situation. No one will be allowed to create hindrance in the journey of public service and crackdown against illegal profiteers will be continued, the CM announced and vowed to go to every extent to provide relief to the citizens.

The CM also raided PS Sialkot Airport and talked with the accused confined in the lockup. He inspected the front desk and inquired the visitors about their experience. Talking on the occasion, the CM asked the police to perform as required resources are provided to them. Prompt relief to the visitors should be ensured; he added and announced one lac cash prize for officials for showing good performance. The good performers will be encouraged but action will be continued against those failing to serve the masses, the CM warned.

Earlier, CM Usman Buzdar went to the residence of Auqaf Minister Syed Saeed-ul-Hassan Shah in Zafarwal tehsil of Narowal and condoled with him over the death of his brother Syed Faiz-ul-Hassan Shah. The CM offered Fateha for the departed soul and extended sympathies to the bereaved heirs. I have been deeply saddened over the death of your brother and the pain of departure of loved ones cannot be expressed in words, he said. May Almighty Allah grants courage to the bereaved family to bear the loss with equanimity, the CM added.

The PTI government is inaugurating public welfare projects every other day while opposition is completely apathetic about public issues. This was stated by Chief Minister Punjab Sardar Usman Buzdar in a statement issued on Monday. The CM regretted the PDM is busy in a spate of conspiracies to obstruct the development process. In fact, these elements have become unnerved due to the country’s journey towards the right direction, he added.

The CM stressed the people are well aware of the fact that these parties played havoc with the economy during their tenures. On the contrary, Prime Minister Imran Khan rectified the past transgressions and the country is moving towards the right direction because of the hard work, commitment and devotion of the PM, the CM stated.

Usman Buzdar maintained the country is facing internal as well as external challenges and the politics of chaos and polarization would be against the national interest. It is regrettable that the opposition is only interested in achieving its personal agenda by promoting anarchy in the country. On the other side, the people want the country to move forward, he stressed. I

t is sanguine that the Prime Minister is taking decisions in the best national interest and the opposition should realize that the era of loot and plunder will not return. The country will achieve its destination under the leadership of Prime Minister Imran Khan, concluded the CM.