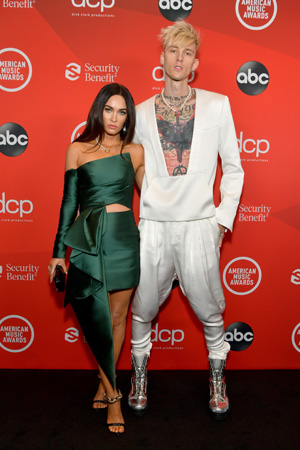 Red carpet romance! Megan Fox and Machine Gun Kelly just made their relationship officially official at the 2020 American Music Awards. The couple turned the annual ceremony into a date night after they arrived at the Microsoft Theatre in Los Angeles, Calif. on Sunday, Nov. 22.

The duo has been one of Hollywood’s hottest couples since the summer. Just this month, Megan gushed over the 30-year-old musician and detailed their strong connection during a candid interview with Nylon.

“Loving him is like being in love with a tsunami or a forest fire,” the actress expressed with a laugh. “The intensity of merging with him is just overwhelming, and the threat it poses is so powerful but so beautiful that you have no choice to surrender with reverence and with gratitude.” The 2020 American Music Awards marked the first time the pair stepped out at an event together. Making their red carpet debut as an item, the two made sure to drop jaws with their outfits. Megan made everyone green with envy with her regal yet risqué ensemble by Azzi and Osta.

The Transformers alum lit up the red carpet with an emerald green get-up that featured geometrical cut-outs, which showed off her toned physique. The dramatic fabric that wrapped around her waist, along with the design’s one-sided sleeve gave it much more edge.

‘Loving him is like being in love with a tsunami or a forest fire,’ the actress expressed with a laugh. ‘The intensity of merging with him is just overwhelming and the threat it poses is so powerful but so beautiful that you have no choice to surrender with reverence and with gratitude’

She tied her look together with silver diamond jewelry pieces and black sandal heels by Giambattista Valli that had chunky gold chains on the straps. Not that we’d expect anything less from the star but she certainly pulled out all of the style stops for the fanciful affair. And considering she’s a presenter tonight, it’s easy to see why she dressed to impress.

As for Machine Gun Kelly? The rapper opted for something electrifying instead of the basic black-and-white tuxedo. He donned a silk white outfit by Balmain. His blazer top had a plunging neckline and puffed sleeves, which perfectly complemented his joggers and shiny silver boots.

Like Megan, the “Bloody Valentine” star is a big deal tonight. He will take center stage and perform at the 2020 AMAs. He even teased his upcoming performance with Travis Barker hours before the star-studded show.

“me and @travisbarker performing (and revealing something special) on the AMA’s tonight,” he shared on Twitter.

It’s only a matter of time before viewers learn what MGK has up his sleeve. Of course, tonight’s ceremony will feature an incredible lineup of performers. Katy Perry, Megan Thee Stallion, BTS, Maluma and many other artists are expected to take the stage. In fact, Justin Bieber will perform for the first time in four years at the 2020 AMAs, so you know it’s going to be one for the books.