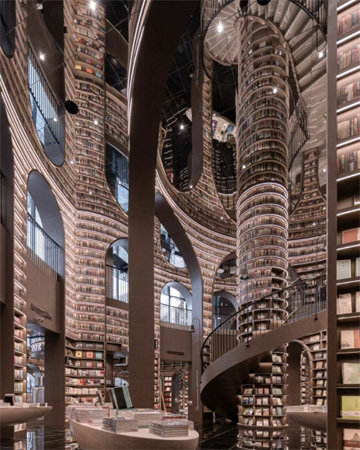 If you are a real fan of both the Harry Potter books and the films, you will see the resemblance. In what appears to be a dream-like and fantastical representation of the magical Harry Potter world, a newly-opened bookstore in Sichuan, China is being compared with some scenes from the fictional world created by JK Rowling and brought to life by the Warner Bros. Studio. According to Insider, the two-story space has been designed by a Shanghai-based studio called X+Living. It has been lined with row after row of glowing book shelves that appear to extend indefinitely, all thanks to the illusion created by mirrored ceilings and the shiny black tiled floor. The surreal nature and architecture of the bookstore have made people liken it to the world of Harry Potter, particularly the changing labyrinth of magical staircases. Additionally, some people have even called the space “a combination of the Great Hall and Room of Hidden Things” from Hogwarts.