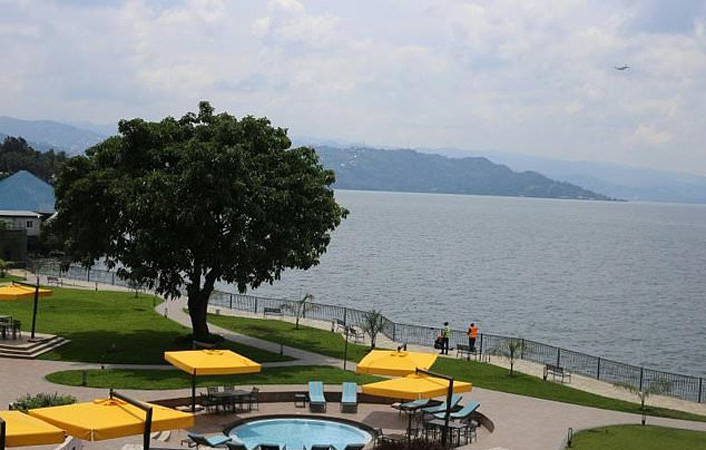 The new five-star Serena Hotel in the city of Goma, eastern Democratic Republic of Congo, has more than 100 luxury rooms and all of the amenities: a conference centre, restaurants, spas and a gym.

The upscale hotel stands out in the capital of North Kivu province, better known as a stronghold for dozens of armed groups than as a tourist destination.

It is the latest project in the region to come to fruition as DR Congo and a local business magnate are eager to turn the page on the country’s insecurity and attract investors.

“Generally people perceive this place as a war place, a place of instability. Everything negative,” said the hotel’s Kenyan manager, James Nzavwala.

Serena Group, which is 45 percent owned by the Aga Khan Fund for Economic Development, is betting on a business clientele and the tourism potential of the nearby Virunga National Park, famed for its volcanoes and critically endangered mountain gorillas.

The construction of the Serena Hotel took 10 years and was made possible thanks to investment by the most influential businessman in Goma: Vanny Bishweka.

The 55-year-old former hardware dealer is already an investor in another hotel on the shores of Lake Kivu, and is a partner in Tunisian firm EPPM which exploits the lake’s methane gas.

A single room for 250 dollars (210 euros) a night is the price of entry to the first five-star hotel in town. The guest rooms in the palatial premises opened in September offer a fine view over the swimming pool and the lake, on which Goma lies at the northern tip.

On the border with Rwanda, close to Uganda and Tanzania, Goma is also at the heart of the two provinces of North and South Kivu, where armed groups have been fighting for control of land, minerals and timber since the two Congo Wars in 1996-2003.

Spared direct militia incursions since 2012-2013, Goma faces problems of security in outlying districts far from the residential areas near the shore of the lake, which host non-governmental organisations and part of the United Nations mission in the country, MONUSCO.

Bishweka’s first lakeside hotel, the Ihusi, opened in 2002, the year the Mount Nyiragongo volcano erupted and took about 100 lives.

Ihusi is also the name of Bishweka’s firm of swift canoes, which can reach Bukavu on the southern tip of the lake in three hours, via the magnificent island of Idiwi.

The businessman is said to be close to former president Joseph Kabila, who was in power from the Second Congo War to 2019 and remains an influential figure.

Bishweka denies the rumour. “There’s politics and there’s business,” he says, though the line between the two is not always clear in DR Congo.

A few months ago, he felt the wind of change blowing from Kinshasa, the distant capital where President Felix Tshisekedi announced a crackdown on corruption.

One of Bishweka’s associates, Modeste Makabuza, the director general of the Congolese Construction Company (Sococ), was sentenced in June to a year in jail for embezzlement.

“I don’t know that it was embezzlement,” says Bishweka, adding that he was not troubled in the affair. “I’m a shareholder with 35 percent. It is he who is director general.”

A pivotal figure in Goma’s business community, “Vanny” also holds 20 percent of the shares in a firm that has been changing the lives of young entrepreneurs for more than two years, distributing electricity.

His Congolese Water and Electricity Company (Socodee) buys and distributes part of the electricity produced by Virunga Energie, which is a subsidiary of the national park operator.

In recent years, Virunga Energie has built four hydroelectric power plants to the north of Goma, with support from the European Union.