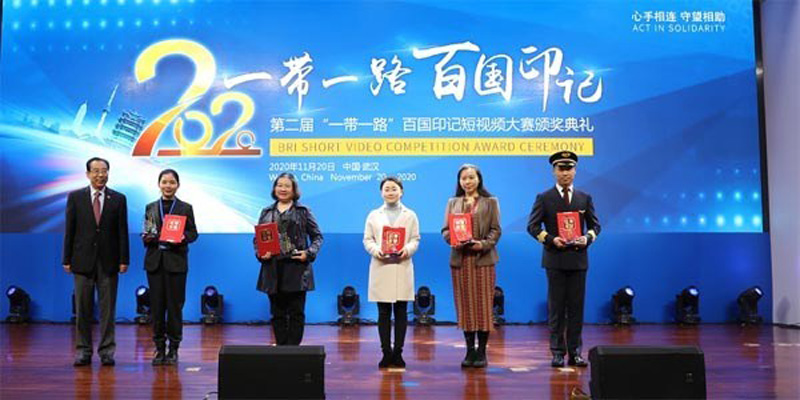 For example, one video submitted by Gezhouba Co tells the story of Naseer from Pakistan, a construction worker from Dasu Dam, a large hydroelectric gravity dam, whose civil works were undertaken by Gezhouba. Naseer’s work at the Dasu Dam has changed the lives of his family and enables his kids to study at school.

According to statistics, the entries of this competition have received more than 300 million views, including nearly 50 million views overseas, providing colorful stories about the Belt and Road to a global audience.

The wonderful videos of this competition were not only posted and displayed on the exclusive voting platform Kwai with the hashtag of “#Footprints and Memories#”, but also published on Douyin, Bilibili, and Tencent Video, as well as overseas social media platforms such as Facebook, Twitter, YouTube, and TikTok.

The competition, co-organized by the China Public Diplomacy Association, the News Center of the State-owned Assets Supervision and Administration Commission of the State Council (SASAC), and Global Times Online, was held in Wuhan.

Themed Act in Solidarity,the second BRI short video competition continues to focus on the BRI while carrying forward the ideas of planning that were a part of the first competition. By collecting short video stories from builders and beneficiaries, from countries all along the Belt and Road, the competition helps build a community with a shared future for mankind.

Launched in mid-July and ended at the end of September, the competition received more than 500 entries from nearly 80 countries. After the Organizing Committee’s preliminary review, public voting and expert evaluation, the 10 final award winners of this competition were announced.

The competition has drawn extensive attention since its launch in July, said Wu Hailong, president of China Public Diplomacy Association. He said it was actively joined by Chinese enterprises and their employees in Belt and Road countries, who used their cameras to unfold the touching stories of beating COVID-19 together with local people and joining hands with them to share weal and woe.

The videos demonstrated the characters of the employees of the Chinese enterprises in the Belt and Road countries, he added. Xie Rongbin, deputy editor-in-chief of Global Times said at the ceremony that Global Times and Global Times Online, as media outlets with both domestic and international influence, have always taken the BRI as a vital topic in their reports over the recent years.

He said the competition was a bold attempt of the Global Times Online to tell Chinese stories and build a bridge of international economic and cultural exchanges as a media outlet.

Huang Zhijin, deputy secretary of CPC China Railway Major Bridge Engineering Group Co. compared the BRI Short Video Competition to a bridge connecting people and enhancing their friendship, saying China is willing to join hands with and offer mutual assistance to Belt and Road countries and regions to build a bridge of common development in the year of 2020 haunted by the COVID-19 pandemic.