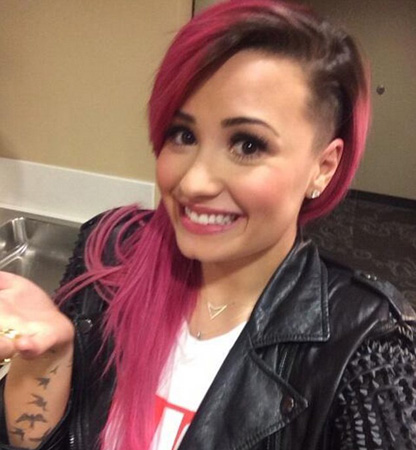 You have to be “Confident” to pull off going both blonde and semi-bald in one week.

Demi Lovato once again mixed up her hair style, debuting her newly shaved head on Instagram on Wednesday, Nov. 18.

In a move right out of Halsey’s playbook, Demi revealed her cropped undercut with a photo of the back of her head as she wore a black leather jacket. The 28-year-old musician captioned the look, “I did a thing…” to which Ruby Rose responded, “Yes you did!!!”

The image was taken by Demi’s photographer Angelo Kritikos, who wrote on Instagram, “Already obsessed with this new era” and teased, “Who wants to see the front?”

In a move right out of Halsey’s playbook, Demi revealed her cropped undercut with a photo of the back of her head as she wore a black leather jacket

Now we’re just wondering if the haircut is a sign that her very “vulnerable” seventh album is on the way and that its aesthetic is just as edgy. Case in point: Fans went wild on Twitter, speculating that Demi is “entering her Bangerz era” with a rebellious crop not unlike Miley Cyrus’.

Her wardrobe stylist Siena seemed to confirm that a new era is beginning by writing on Insta, “And to the next chapter…”

Then her hairstylist Paul Norton, who worked on the style with beauty expert Amber Maynard Bolt, summed our feelings up perfectly. Paul told the superstar, “YOU GOT MOXY KID.”

for her hosting gig.

During her red hot arrival, the “Sorry Not Sorry” singer sported a fiery pantsuit by designer Naeem Khan, before showing off her lighter locks.

Maybe the age-old adage of getting your hair cut after a breakup really holds true. If so, it seems Demi’s new ‘dos are really helping her heal

following her sudden split from fiancé

She poked fun at their short-lived engagement during the People’s Choice Awards by saying, “COVID hit and everything shut down, so I did what everyone else did, I went into lockdown mode and got engaged.” She then joked, “I binged seven seasons of Pretty Little Liars, got unengaged, then went looking for aliens in the desert, so basically the same as everyone else.”

I mean, she already said what we were all thinking when she called 2020 a “s–tshow.” The only way she can save it is by dropping her next album already!