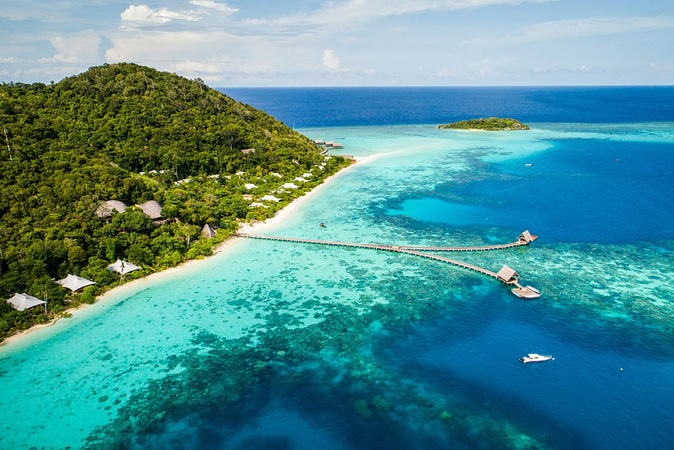 Rain hammers down on the tin roof and the tiny ten-seater seaplane rocks from side to side. ‘You’ve chosen a good day to fly with us,’ the barefoot pilot says with a smile.

The sky is black as we take off along the sodden runway, and lightning strikes the second the plane lifts off the ground.

For more than an hour, we see little but the blue of the South China

Sea until, out of nowhere, six jungle-covered islands rising out of a twinkling lagoon loom into sight. The seaplane circles them, creamy in the afternoon sunlight, before landing on the reef-specked water.

Bawah Reserve, a remote atoll in Indonesia’s Riau Archipelago between Borneo and Malaysia, is a four-hour adventure by ferry and seaplane from Singapore.

Our journey begins with an overnight stay at the Six Senses Maxwell in the Lion City, where my friend Christina and I spend the evening sipping Singapore Slings in the bustling food markets before setting off the following morning.

Set over 750 acres, Bawah encompasses six islands — Merba, Sangha, Lidi, Elang, Takong and, our home for three nights, Bawah. Its 36 villas are perched on stilts above the ocean, snuggled in the forest or, like ours, hugging the beach.

The cluster of uninhabited islands was bought in 2010 and, after five years of construction, Bawah reserve opened in 2018.

Guests come to the resort from across the globe. We’re here in mid-December; low season due to the rain.

There are 137 members of staff on the island but just six other guests; a German financier and his wife, a bronzed young couple from Melbourne and a Saudi prince and his fiancée, though they chose to pay tens of thousands of pounds to charter a private jet in order to avoid the 30-minute public ferry crossing — obviously.

As we step from the seaplane onto the wooden fishtail-shaped jetty, we’re welcomed by a party of musicians playing local percussion drums and greeted by Eva, our personal host. She guides us along the island’s sandy pathways, lined with palms and Indian almond trees, and points out placid, crocodile-like monitor lizards — some 6ft long — and amber-winged butterflies.

Wooden boards painted with our names hang at the entrance to our beachfront suite, which is made from chunky bamboo and recycled teak, and kitted out with jellyfish-shaped chandeliers and a freestanding rustic copper tub. We have our own private beach overlooking the lagoon, complete with an outdoor shower and squidgy sunbeds, from which we can watch families of bashful hermit crabs scuttling into the lagoon.

Step into the 28c water anywhere on the island and, after a few kicks of your flippers, you’ll be gliding above a whole other world.

I’ve long wanted to swim with turtles, so each afternoon I head out on a mission with my snorkelling instructor, Jerri. Like most of the staff here, he’s local, having grown up on an island 20 miles away. His English is limited but he’s eager to learn and knows the reef like the back of his hand.