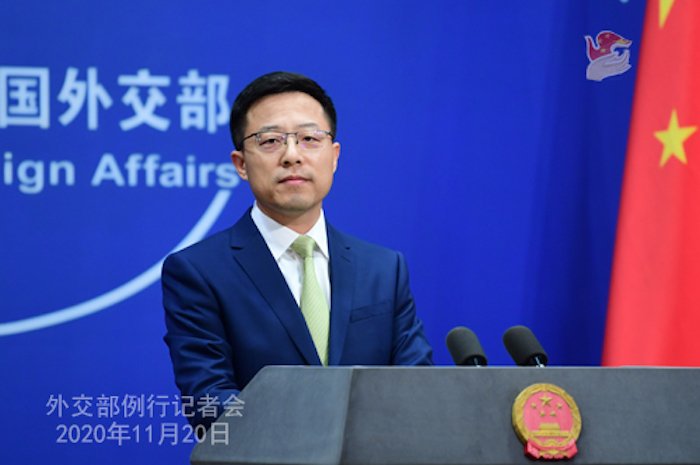 Commending Pakistan’s contribution to the international counter-terrorism cause, Beijing on Friday backed Islamabad’s efforts to combat terrorist forces and safeguard national and regional peace and security.

He called on the international community, especially regional countries, to carry out counter-terrorism cooperation and safeguard collective security.

Later, in a tweet, Zhao said China appreciated the “positive contribution by Pakistan to the international counter-terrorism cause” and “firmly supports Pakistan in cracking down terrorist forces”.

On China-Pakistan Economic Corridor (CPEC), he asserted that any attempt to sabotage the project is doomed to fail.

“CPEC is a major pioneering project of the Belt and Road Initiative,” he said during the daily press briefing. “It is of great significance to not only the common development of China and Pakistan but also regional connectivity and common prosperity.”

Zhao said Beijing was “confident that with the support from the international community, China and Pakistan will ensure the smooth and successful building and running of CPEC”.

“Meanwhile, we believe that any attempt to disrupt the building of CPEC would be foiled eventually,” he added.

Islamabad rubbished the allegations, stating that they were “desperate attempts to divert international attention from its state-terrorism in IIOJK and state-sponsorship of terrorism against Pakistan”.

The Foreign Office said that it was obvious India had accelerated its anti-Pakistan propaganda after its state sponsorship of terrorism had been exposed by Islamabad in a dossier.

Last week, Pakistan presented a detailed dossier containing evidence of India’s involvement in terrorism being carried out in Pakistan.

“Today, we have irrefutable facts that we will present before the nation and the international community through this dossier,” Foreign Minister Shah Mahmood Qureshi had said as he addressed a press briefing at the Foreign Office alongside Director-General of Inter-Services Public Relations (ISPR), Maj Gen Babar Iftikhar.

The press briefing had come a day after ISPR said four civilians and a Pakistan Army soldier were martyred in “unprovoked and indiscriminate” shelling by Indian troops from across the Line of Control (LoC) in several areas of Azad Jammu and Kashmir (AJK).

“You can see a pattern of constant ceasefire violations,” Qureshi had said, adding that the dossier contains many details and some of them will be used in “the time of need”. “The world knows that when Pakistan was busy partnering in the peace process, India was laying a web of terrorism around us,” said the country’s top diplomat.

“India was allowing its land to be used against Pakistan for terrorism,” the foreign minister had said. He added that New Delhi not only used its own soil but also made use of neighbouring countries to “attack Pakistan”.

“India claims itself to be the world’s biggest democracy but its actions show it is becoming a rogue state,” Qureshi had said.

“We have information and evidence that India is promoting terrorism and has developed a plan to destabilise Pakistan.”

The foreign minister had said the information was “not new” for him but the time had come for Islamabad to take the nation and international community into confidence.

“I feel that staying silent will no longer benefit Pakistan or regional peace and stability.”